The continuing argument over quad bike safety in Australia mirrors many of the other occupational health and safety (OHS) debates over whose evidence is truer, is the argument about politics or safety, the cost of change and whether one size of OHS laws and enforcement fits a splintering employment structure.

The Liberal National Coalition won the recent Federal Election in Australia, retaining power and with a stronger Parliamentary influence. In terms of quad bike safety, action on the Australian Consumer and Competition Commission’s report will follow the schedule set out by the then Assistant Treasurer Stuart Roberts. Several quad bike manufacturers and their industry lobbying arm, the Federal Chamber of Automotive Industries (FCAI), have ramped up the pressure on the Government now that they smell another three years of sympathetic government.

It is important to keep reminding ourselves that OHS, for most Australians, remains regulated at a State level and national positions and recommendations like that of the ACCC are unlikely to be implemented nationally without Federal laws. 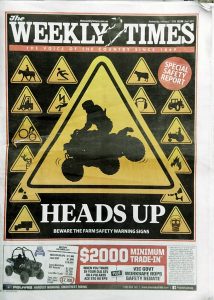 The Weekly Times newspaper has included an 8-page wraparound to its 7 February 2018 edition about workplace safety. The supplement is timely, the contents are indicative of cultural and political changes and the supplement is a nice summary of the multiple hazards and management approaches needed in agriculture (the same as in most industries, really).