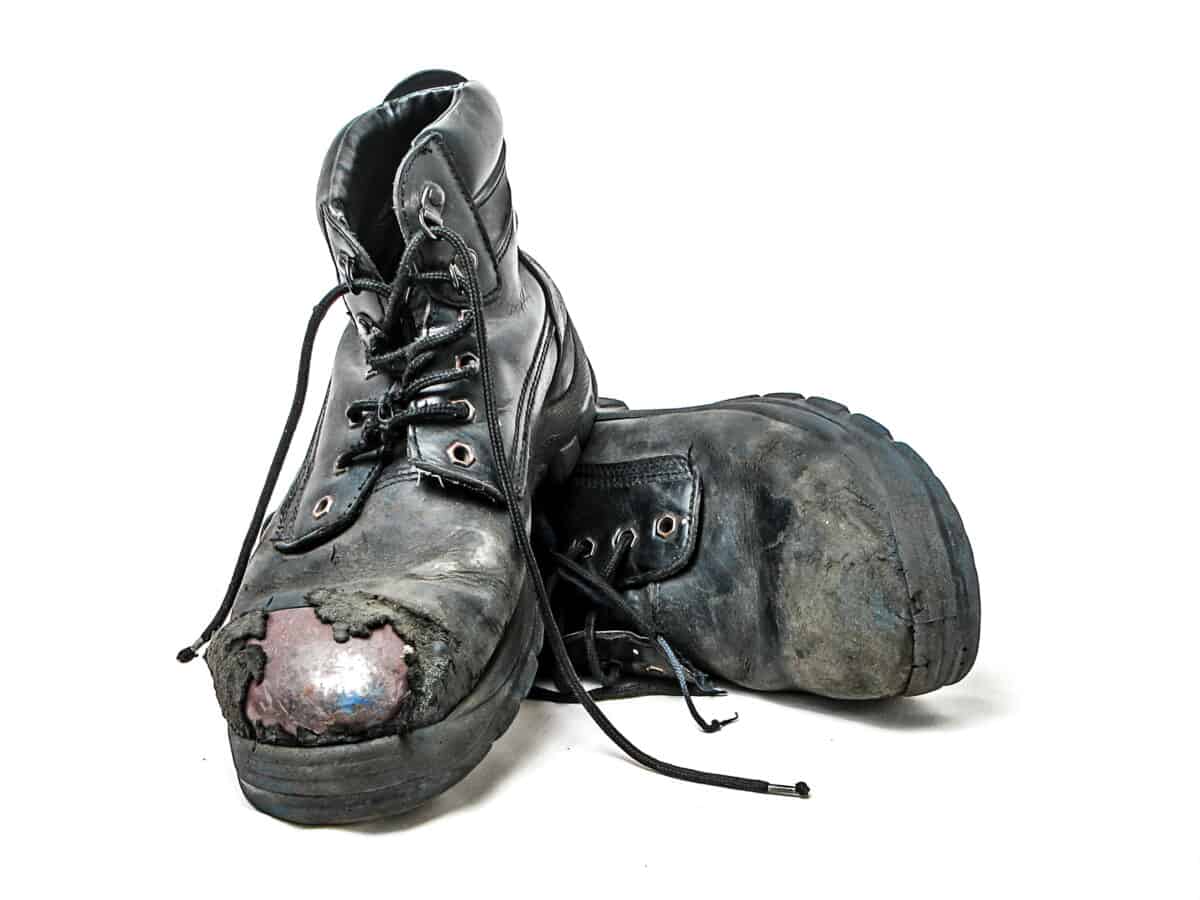 Every profession has safety practices that have existed for years and are integral to that profession’s character and operations. These have usually occurred because of correlation more than a cause, and occupational health and safety (OHS), in particular, advocates evidence-based decisions.

One longstanding example could be the mandatory wearing of lace-up ankle-high safety boots for working in the construction of railway infrastructure. Another could be the current debate over the effectiveness of face masks for protection from dust particles and airborne infections.

Hi Kevin – arriving at this conversation incredibly late (though ‘better late than never’, as I believe someone once intoned), but there’s a decent reason I’m now invested in the conversation.

I recently spent an interesting hour or so with a sports podiatrist discussing, as you would suspect, footwear. More specifically, we talked about footwear to suite workers who spend the bulk of their time outdoors, working and walking on innumerable forms of uneven surfaces. And more specifically again, we discussed the degree(s) of ankle protection that, evidently, high-cut boots are able to provide.

One of the take-home messages I took was the (apparent) absence of data to support the continued promotion of ‘high-cut’ footwear, when it comes to trying to provide ankle protection.

Slips, trips and falls are often the neglected “bastard son” of occupational health and safety but the can cripple and can, literally cost an arm or a leg.

The traditional approach to control these hazards have been to make  the working environment safer by mopping up spilled liquids, for instance, or be using a piece of equipment such as a stepladder, or in the long-term or in the beginning of a project, to design out hazards.

We also know that musculoskeletal disorders (MSD) make occur suddenly, and dramatically and painfully, but one’s body has accumulated weaknesses over time.  The UK’s Health & Safety Executive (HSE) has released a research report that indicates a new approach to MSDs or at least a start. END_OF_DOCUMENT_TOKEN_TO_BE_REPLACED

One of the occupations with the clearest need for personal protective equipment (PPE) is that of a firefighter.  There are few other industries where PPE has such a high priority in workplace safety but sometimes PPE can still be forgotten.

A report on ABC radio and online  in Australia on 11 January 2010 shows that even in firefighting PPE may be forgotten.  The firefighter was the first one to take a fire hose to a shop fire and did not have on any breathing apparatus (BA).  His fully suited colleagues caught up with him and began fighting the fire.  It appears from this one media report that the firefighter kept his attention on fighting the fire rather than taking a break and putting on his BA.  Shortly after he began feeling unwell.

On 4 January 2010 the Australasian Fire and Emergency Service Authorities Council (AFAC) released a firefighting information package, based on an early September 2009 workshop, that includes some interesting information about firefighter health and safety.   END_OF_DOCUMENT_TOKEN_TO_BE_REPLACED

Some of the best OHS writing comes from the personal.  In a couple of days time a new book will go on sale that illustrates big issues from a niche context and brings to the research a degree of truth from the personal experiences of the author.

Pia Markkanen has written “Shoes, glues and homework – dangerous world in the global footwear industry” which packs in a range of issues into one book.  The best summary of the book comes from the Preface written by the series editors.

“Pia Markkanen’s extraordinary first hand investigation of the dangers of home work in the shoe industry in the Philippines and Indonesia is an important contribution to our understanding of work, health and the global economy. She also carefully documents the intersection of gender relations and hierarchy with the social relations of “globalised” economic development and reveal as the important implications for the health of women, men and children as toxic work enters the home.”

As one reads this book, local equivalents keep popping into the reader’s head.  For instance, Markkanen’s discussion of the home as workplace raises the definition of a “workplace” that is currently being worked through in Australia.  She briefly discusses the definition in her chapter “Informal Sector, Informal Economy” where she refers to an ILO Home Work Convention, and usefully distinguishes between the homeworker and the self-employed, a distinction that Australian OHS professionals and regulators should note.

Markkanen does not impose a Western perspective on her observations and acknowledges that regardless of the global economic issues and social paradigms, “shoemakers felt pride for their work”.  This pride goes some way to explaining why workers will tolerate hazards that others in other countries would not.  In many OHS books this element is often overlooked by OHS professionals and writers who are puzzled about workers tolerating exposure and who look to economic reasons predominantly.

In South East Asia, limited knowledge can be gleaned from literature reviews as the research data is sparse.  Markkanen interviewed participants first hand and, as mentioned earlier, this provides truth and reality.  She describes the shoe makers’ workshops in Indonesia:

“Shoe workshops are filled with hazardous exposures to glues, primers, and cleaning agents, unguarded tools, and dust.  Work positions are often awkward, cuts and burns are common, as are respiratory disorders.  Asthma and breathing difficulties are widespread when primers were in use.  Workers were reluctant to visit doctors because of the expense.”

She then reports on the interviews with Mr. Salet, a shoe manufacturer, Ms. Dessy, the business manager, Mr Iman, the business owner, Mr Ari, a skilled shoemaker, and many others.

Markkanen also illustrates the shame that the minority world and chemical manufacturers should feel about the outsourcing of lethal hazards to our fellows.  In the chapter, “Shoemaking and its hazards”, she writes:

“Shoe manufacturing will remain a hazardous occupation as long as organic solvents are applied in the production.  It is notable that in 1912, the Massachusetts Health Inspection report declared that naphtha cement, then in use for footwear manufacturing, was considered hazardous work.  The 1912 report also referred to a law which required the exclusion of minors from occupations hazardous to health – the naphtha cement use was considered such hazardous work unless a mechanical means of ventilation was provided and the cement containers were covered…. minors were prohibited from using the cement.  Almost a century later, hazardous footwear chemicals are still applied – even by children – in the global footwear industry.”

There is little attention given to the OHS requirements of majority world governments by OHS professionals in the West, partly because the outsourcing of manufacturing to those regions has led to the reporting of OHS infringements and human rights issues more than information about the legislative structures.

Markkanen provides a great section where she describes the OHS inspectorate resources of the Indonesian Government and the fact that Indonesian OHS law requires an occupational safety and health management system.  Granted this requirement is only for high-risk industries or business with more than 100 employees but there are many other countries that have nothing like this.  Markkanen quotes Article 87 of the Manpower Act 2003:

It is acknowledged that this section of legislation is hardly followed by business due to attitude and the lack of enforcement resources but we should note that safety management is not ignored by majority world governments.

Lastly, Markkanen provides a chapter on the gender issues associated with the shoemaking industry.  She makes a strong case for the further research into the area but it is a shame that to achieve improvements in women’s health the reality is  that

Some male OHS professionals may be trying to be “enlightened” but this seems to not be enough to work successfully in some Asian cultures.

Overall this book provides insight by looking at a small business activity that illustrates big issues.  The book is a slim volume of around 100 pages and it never becomes a difficult read because it is concise and has a personal presence that other “academic” books eschew.  As with many Baywood Books, the bibliographies are important sources of further reading.

At times it was necessary to put the book aside to digest the significance of some of the information.  Occasionally the reality depicted was confronting.  Baywood Books could do well by encouraging more writers to contribute to it Work, Health & Environment Series.

[SafetyAtWorkBlog received a review copy of this book at no charge.  We also noted that, according to the Baywood Books website, the book is available for another couple of weeks at a reduced price.]

A recent article in a rehabilitation newsletter reminded me of a client from several years ago.

Several employees in a small item packaging line were reporting wrist and forearm soreness toward the end of their shift.  They believed that the line speed was too fast for them to comfortably work their full shift.

A couple of days later, I was at the workplace at the end of the shift.  The employees said they were sore but they did not go home.  They stayed on for several hours of overtime.  When I asked them about this they said they always do the overtime.

So the assessment of working environment had incomplete data.

It is in this context that consultation is required between employees, production manager, supervisor, human resources officer, and the health & safety rep, if one is on site.  This consultative group can then make a decision that everyone understands the justification for, even if some participants do not like it.

A question to ponder from the scenario above – if one of the workers developed pain during the normal work shift, undertook overtime without the employer being informed of the pain and put in a worker’s compensation claim for the pain, would the employer feel justified in contesting the claim?

In 2000, Melody Kemp was interviewed for Safety At Work magazine about her experience monitoring Western corporations’ workplace safety in Asia. Below is an extract of that interview.

In 2000, Melody Kemp was interviewed for Safety At Work magazine about her experience monitoring Western corporations’ workplace safety in Asia.  Below is an extract of that interview.

The full interview is available by clicking the HERE.

Recently you were part of an international OHS inspection team in Indonesia. Can you tell us about that?

I guess the reason I became part of the team was that I was known to the social research group that we were working with.  First, Reebok, who we were working for, put the job out for tender, which was actually quite unusual.  Normally the other shoe companies tend to elect an international consulting accounting firm like Price Waterhouse or Ernst Young.

The woman who took over the human rights job used to work for the Asian Foundation and she had a totally different set of beliefs.  She had a background in social activism and human rights, so she was interested in a different approach.  Being as independent as they could be they decided to take this opportunity. They subcontracted to a prominent social research group who have worked for World Bank and have a lot of status.

Also, they were all Indonesians while I was the only foreigner on the team but I also speak Indonesian.  A major factor was that we were all familiar with the language and culture.  They needed an OHS person, they preferred to work with a woman, and I was the only woman they could find in Indonesia with that mix of skills.