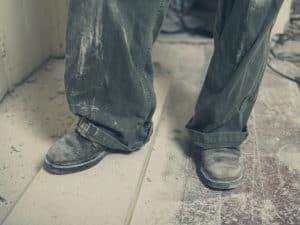 Recently a public relations firm has been promoting a statement about workers’ compensation and occupational asthma in support of the Australasian Asthma Conference.  The statement was a timely reminder of the 2015 report – The Hidden Costs of Asthma.  These documents are aimed at the management of asthma rather than the prevention but, coincidentally, the Australian Government entered some legislative amendments in Parliament that will help with the prevention of this important condition.

On 19 May 2010, the Optometrists Association Australia (OAA) launched a national eye safety campaign.  This campaign is worthwhile but illustrates some of the shortcomings of this type of campaign.

“Sixty per cent of all eye injuries happen at work, .. warn optometrists who are urging every workplace to put eye safety procedures in place as part of a new national campaign.

The need for eye safety procedures is clear but the recommended action is too narrow.  The entire focus of the campaign is to increase awareness of eye hazards and to increase the usage of safety eyewear.  There is no focus on the reduction of the hazard itself, just the protection of the worker’s eyes. END_OF_DOCUMENT_TOKEN_TO_BE_REPLACED

SafeWorkSA has issued media releases on 20 January 2010 concerning two recent decisions from the Industrial Relations Court.  The first of these will a situation of bypassing a machine guard that is all too familiar to OHS professionals –

“a pair of vice grips had been attached to the finger guard at the front of the press, restricting its full range of movement and allowing access to the main moving parts during operation”.

The plant was a Hallbank 40 Tonne Front Press and the operator, Karen Carter, was unfamiliar with the machine.  Prior to this hearing there was a dispute of facts hearing concerning who set up the press prior to the incident. END_OF_DOCUMENT_TOKEN_TO_BE_REPLACED

The 19 May 2009 edition of The 7.30 Report included a fresh perspective on rehabilitation from workplace injuries.  According to the website

“Sydney man Frank Spiteri was not expected to live after suffering third-degree burns to 70 per cent of his body in a major workplace explosion in 2007.

Not only did Mr Spiteri survive, but he has transformed from an overweight businessman into a fitness fanatic who is determined to help other burns victims.”

The Australian Broadcasting Corporation has provided an extended interview with Frank online. It is a story of extraordinary personal will, a story rarely seen on national television.

This week workplace safety on a building site received a much needed dose of humour.  The Australian show “ThankGod, You’re Here” had a comedian enter a pretend building site and have to face questions from an OHS inspector as if he was the owner of the site.

The sketch has added impact because of its timing.  It is hard to imagine this occurring ten years ago in a society and industry where OHS compliance was less valued, when hardhats were considered optional and when brightly-coloured vests looked stupid.  That the sketch is funny is a measure of how OHS regulation and enforcement has matured and just how successful the OHS regulators have been in changing the society’s attitudes to workplace safety in Australia.

Also, it shows something more illustrative of comedy, more true.  In the sketch there are some wonderful stunts done by a small earthmover.  Only last year there was outrage, and fines, over some forklift stunts done for real by a young driver in Melbourne.  The environment makes the difference between laughter and outrage.

The success of the TV show’s concept is also indicated by the issue of the 12-year-old welder on the building site.  The comedian, Merrick Watts, removes the issue of age by insisting the young boy is actually in his fifties and just looks younger.

WorkSafe Victoria, whose logo is worn by the pretend inspectors in the sketch, have said that they did not pay for brand placement and that the show did not belittle the work they do.  In fact the show “actually showed that we have a job to do and that there are good reasons for it.”