The Victorian Government has announced a review of the regulations pertaining to sex work. It will include several areas related to occupational health and safety (OHS):

Consumer Affairs has carriage of the Sex Work laws but the breadth of the review would have been better served if the announcement had been a joint one with the Minister for Workplace Safety and Minister for Health.

This review should offer a real challenge to Victoria’s OHS laws, the OHS profession, consultants, advocates and critics.

END_OF_DOCUMENT_TOKEN_TO_BE_REPLACED

It is widely acknowledged that work-related incidents are under-reported through worker or management choice. But there are institutional practices that mean that incidents in company vehicles are reported as traffic incidents even though the driver may be obliged to follow company safe driving procedures and the car has been purchased exclusively for work activities. But this situation is not just related to transport. Last week, Michaela Dunn, was murdered by a client while at work but her death will not be recorded as a work-related death. 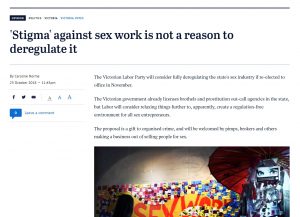 Dr Caroline Norma had an opinion piece published in The Age newspaper on October 24 2018 that fails to acknowledge the occupational health and safety (OHS) duties of Victorian businesses operating sexual services.  SafetyAtWorkBlog has looked closely at OHS in this industry sector before and has previously communicated with Dr Norma on sex work safety.  Dr Norma’s current article illustrates a common perspective on workplace safety and health issues where one set of legislation dominates the public policy conversation rather than the multidisciplinary approach.

It is necessary to clarify Dr Norma’s opening statement:

“The Victorian Labor Party will consider fully deregulating the state’s sex industry if re-elected to office in November.”

According to the 2018 Platform of the Victorian Australian Labor Party (ALP), in the context of Human Rights and Equal Opportunity, the ALP will:

“recommend that the Victorian Law Reform Commission consider decriminalisation of all sex work in Victoria as per other systems recognised internationally by human rights organisations.” (page 87)

SAWB: What action do you recommend that brothel owners should take, beyond the current legislative and licensing requirements, to ensure that only safe sex occurs on their premises?

The occupational health and safety of sex workers is one of the most difficult areas to write about as the industry is politically and ideologically charged with matters of feminist ideology, human rights and sex trafficking, religious morality and NIMBY lobbying.  In such an environment, it is important that the OHS needs of sex workers not be forgotten.

On 13 July 2011, The Age newspaper reported on the threat of legal action by one sex workers on a Victorian licensed brothel, Butterflys of Blackburn.  The article raised many OHS issues for the brothel industry.  In short, the article reports that a sex worker is suing the brothel because the brothel, allegedly, established an expectation that the sex workers would allow unprotected sex, sexual acts without a condom or other protection, an offence under Victorian law.  This particular sex worker’s experience in Butterflys of Blackburn was that, when refusing unprotected sex to a client, the client assaulted her, attempted to rape her and threatened her with a gun.

The Age reports that the woman “has since been diagnosed with post traumatic stress disorder, whiplash in her neck and a torn muscle in her shoulder.”  The worker is already receiving workers’ compensation and is pursuing compensation for permanent impairment.  Her plans for suing the brothel relate to the accusation that the brothel failed to provide a safe workplace. END_OF_DOCUMENT_TOKEN_TO_BE_REPLACED