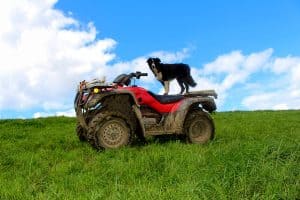 In findings released this week in New Zealand, Coroner Brigitte Windley has recommended that WorkSafeNZ and the Accident Compensation Corporation  consider whether there is a case for mandatory crush protection devices (CPD) or Roll-over protection devices (ROPs) for all quad bikes. She states that her decision is based on

This contradicts the persistent line from the quad bike manufacturers and the Federal Chamber of Automotive Industries who prefer their own research which emphasises other driver-based control measures and appears to show that CPDs can increase the risk of crush injuries.

In support of manufacturers’ and FCAI guidelines, helmets were available for use but the deceased worker was not wearing one at the time of the incident.  Although both WorkSafeNZ and the Coroner agreed that the lack of the helmet was unlikely to contribute to the death, it illustrates the inherent unreliability of Personal Protective Equipment (PPE).  PPE is only effective if it is used and this unreliability is a major reason why it is the lowest control measure on the Hierarchy of Controls.

One of the occupational health and safety arguments in favour of a redesign of quad bikes is that engineering controls, such as ROPs and CPDs or Operator Protection Devices (OPDs), are more effective than the lower order controls such as training and PPE.

In the case being investigated, Coroner Windley states that

“Mr Anderson’s quad bike was not fitted with ROP. It is impossible to say that had it been, he would not have suffered a fatal outcome. It seems likely however that his chances of survival would at least have been greatly improved.”

The fitting of crush/operator protection devices have the potential to prevent fatalities and/or to reduce an incident to a Near Miss or a medically treated injury.  The question that needs to be asked about quad bike safety is not why should a CPD be fitted but why not?  As long as the debate continues, there is a higher-than-necessary risk of farmers dying.  At some point, it is just not worth arguing about safety when people’s lives are in danger.  In regard to quad bike safety, that point passed years ago.