In early July 2019, my son and I braved a cold Melbourne Friday night to see our very first improvisational comedy show. The catalyst was a show called “F**k this, I Quit“, produced by the Improv Conspiracy, and which is based on the work experiences of the audience there on the night. I was one of around fifteen in the audience, in a room that only holds forty people, and so occupational health and safety (OHS) became a featured theme that night. I, and OHS, was roasted and it was definitely the funniest night of my professional life.

Several audience members were asked about their work experiences. I mentioned that I consulted in OHS, had provided advice to some of Victoria’s licenced brothels, had an uncomfortable conversation one time about discussing nipples while at work and that I thought the most dangerous workplace hazard was electricity as it was invisible and deadly.

END_OF_DOCUMENT_TOKEN_TO_BE_REPLACED

Discussions about the work-related risks of glyphosate exposure have calmed down until the next court case but it is useful to remember that there have been battles in the past about exposure to agricultural chemicals. Questions in the Western Australian Parliament on 13 June 2019, illustrate the situation in relation to one chemical – 2, 4, 5-T (2,4,5-Trichlorophenoxyacetic acid), a component of the wartime defoliant, Agent Orange.

Melbourne, Australia has recently suffered several notable factory fires that resulted from unsafe storage of chemical wastes. These fires have resulted in toxic fumes across residential suburbs, environmental damage to local waterways and some injuries to workers. Victoria’s Minister for Workplace Safety, Jill Hennessy has responded by increasing penalties for breaching occupational health and safety (OHS) laws. This is a good short-term measure and indicates to the community that their government is doing something but is not a sustainable prevention strategy.

The debate on the risks of using glyphosate products to control weeds continues to ripple around the world largely sparked by the global penetration of media reports from the United States. It is important to look at the risks without the unique litigation climate in the United States. A recent Australian report by SBS television emphasises to the occupational health and safety (OHS) risks of glyphosate.

The report started with mention of reviews into the use of glyphosate products by New South Wales councils and the Victorian Government. It would disappointing if such reviews had not already been conducted given the glyphosate was identified as possible carcinogenic several years ago. That change in the state of knowledge of a hazard should have been sufficient for all glyphosate users to reassess their risks.

This was followed up by information on the residual environmental impacts that was reminiscent of Rachel Carson’s Silent Spring but is not strictly an OHS matter.

The Victorian Government has announced that various safety initiatives are being taken on the silicosis risks associated with products described as synthetic stone. This initiative is an important first step in reducing the exposure of workers to silicosis but there are some curiosities in the announcement and WorkSafe Victoria’s accompanying Information Sheet.

The core elements of the government’s action are:

As the world approaches World Day for Safety and Health at Work and International Workers Memorial Day this coming Sunday it is worth reminding ourselves of some of the immorality that unregulated Capitalism allows. A company in one of the last remaining exporters of asbestos, Russia, has used President Donald Trump’s words and image to support its production and export of asbestos*, a product known for over a century to cause fatal illnesses. 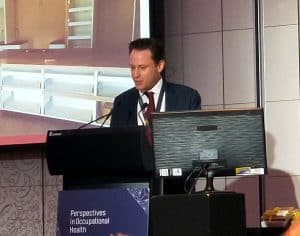 Rumours of a TV report on the increasing hazards of silicosis have floated around for a week or so.  On October 10 2018, the show appeared on the Australian Broadcasting Corporation’s 7.30 program.  But the story is much bigger than the ten minutes or so on that program.

The focus is understandably on silica but perhaps that is too specific.  Maybe the issue of dust, in general, needs more attention.