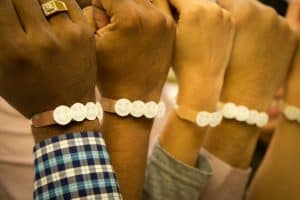 “A new strategy to produce low-cost sensors that allow ultrasensitive detection of ultraviolet radiation (UVR) by the naked-eye is described in Nature Communications this week. The sensors, which are paper-based and wearable, could enable users to manage the impact of UVR on their daily lives.”

The latest edition of the Journal of Occupational Medicine (JOM) (Vol 61. No 5 Aug 2011) includes a short article on the occupational impact of climate change, an issue that must be addressed in the work context and one that places additional challenges for those involved with safe design.

The JOM article lists the following hazard categories that are likely to affect workplaces and activities:

It is unlikely that employers will try to tackle climate change through OHS considerations as there are far more important economic pressures.  OHS, in this context, can only be reactive but several of the issues mentioned above are likely to substantially change work methods and planning. END_OF_DOCUMENT_TOKEN_TO_BE_REPLACED

Most of the discussion about the safety of nanoparticles is split in to the consumer end use of the products or the occupational hazards of their manufacture.  Safety managers, however, need to look at the potential risks of nanoparticles from consumer products that are used in the workplace.  New Australian research again focuses on sunscreens. END_OF_DOCUMENT_TOKEN_TO_BE_REPLACED

The July 2004 edition of SafetyATWORK magazine contained an interview with Sam Holt the CEO of Australian company Skin Patrol.  The fascinating service of Skin Patrol was that they travelled the outback of Australia with a mobile skin cancer testing unit.  That is a big area to cover but with the increasing incidence of skin cancer and the acceptance of ultraviolet exposure as an OHS problem, the service seemed timely.

(The interview is available HERE)

SafetyAtWorkBlog was contacted by Skin Patrol in early December 2009 as it was releasing the findings of a survey of 1,000 outdoor workers.  Its survey has these key findings:

The risks from exposure to ultraviolet are well established and our understanding of the risks have changed considerably within one generation.  The Australian culture has changed to one of sun-worshipping to one where the wearing of hats is enforced at school, hard hats have wide brim attachments, and outdoor work is undertaken in long pants and long-sleeved shirts.  Occupational control measures have been introduced.

Of course, particularly in the construction industry, principle contractors still struggle in a getting compliance with the UV-protection policies but that’s the case for many OHS policies.

Skin cancer risks through high UV exposure are well-established OHS Issues but the reality still does not mean that controlling the hazard is easy to manage.  Culturally we still want to have a tanned complexion even if it is sprayed on.  Tanned skin is still synonymous with good health even though the medical evidence differs.

Skin cancer risks in the workplace are simply another of those workplace hazards that are ahead of the non-workplace culture and that safety professionals need to manage.  The attraction with this hazard is that there is no disputing the evidence.

As the Australian Safety & Compensation Council winds down before its transformation into Safe Work Australia, it is leaving with a flurry of activity.  The legacy that had most immediate appeal was the revised Guidance Note for the Protection of Workers from the Ultraviolet Radiation in Sunlight.  This is the most relevant and contemporary approach to UV as a workplace issue for many years and deserves to be carefully considered.

The need is great.  The report includes these justifications

These are the bases for a good, contemporary and useful workplace policy on UV protection.

Exposure to ultraviolet light is a risk for outdoor workers, particularly, that need to be managed well.  The best way to manage this is a point of debate in OHS management circles but I thought the medical argument on skin cancers and melanoma was over.  Apparently not.

According to an article at BMJ Online, Associate Professor Scott Menzies says

“Sun exposure is clearly a major cause of this disease [melanoma]”.

Sam Shuster is not so sure.

“We need to know much more before we can balance the biological books on ultraviolet radiation, even if we can now close the chapter on melanoma.”

When you are discussing occupational safety with your occupational physician (assuming you have one) bring these articles to their attention so that any skin cancer management program you operate is as valid and robust as it can be.  In OHS, a contemporary state of knowledge is an important base.