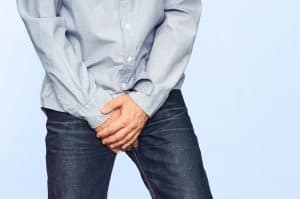 Every man is aware of his penis and scrotum from a very early age. Male genitals do not feature often in discussions about occupational health and safety (OHS) but there was a workplace incident in the United States around 1970 that gained considerable attention but not really from the OHS perspective.  I have always thought this incident would be a useful case study for discussing how this scenario would be managed today.

So how could this incident have been prevented from an OHS perspective?  The most obvious is that conveyor belts and particularly their nip points are required to have guards fitted so that physical contact cannot be made.  In the past that may have been the extent of the OHS consideration but other details in the story lead to other options such as enforcing meal breaks, or shutting down machinery when not in use.

The issue encourages discussion about what is and what is not acceptable, or tolerated, behaviour at work.  Sex during work activities became a popular topic in Australia some years ago when a women put in a workers’ compensation claim after being injured during sex while staying overnight in a hotel for work purpose.  Then there was a lot of discussion about whether the women was at work or not at work (the issue went to the High Court), but the incident, and the related claim, gained considerable media attention.

Any case study discussion could also extend to those who perform sex acts as part of their work.  Do sex workers claim workers compensation?  What type of injuries occur?  As I have consulted in the licenced brothel industry on OHS matters in the past, I can provide some information.  Yes workers compensation claims have been lodged and succeed for injuries related to sex work.  The injuries usually do not involve clients.  When one thinks about the work activity, one realises that clients are there to f*** not fight, and although many would consider this type of work unsavoury it is not inherently unsafe.  Of course, those sex workers outside of licenced brothels face different risks.

But this article is less about the incidents than how one would manage these incidents.  If insidious behaviour, such as sexual harassment, is as under-reported as recent data shows, what hope would there be for an injury involving genitals or other possibly embarrassing incident?  Our safety management systems and organisational cultures need to be at a level where workers would be prepared to report such incidents knowing that any follow-up would be undertaken seriously and afford them the dignity of any other injured or ill worker.