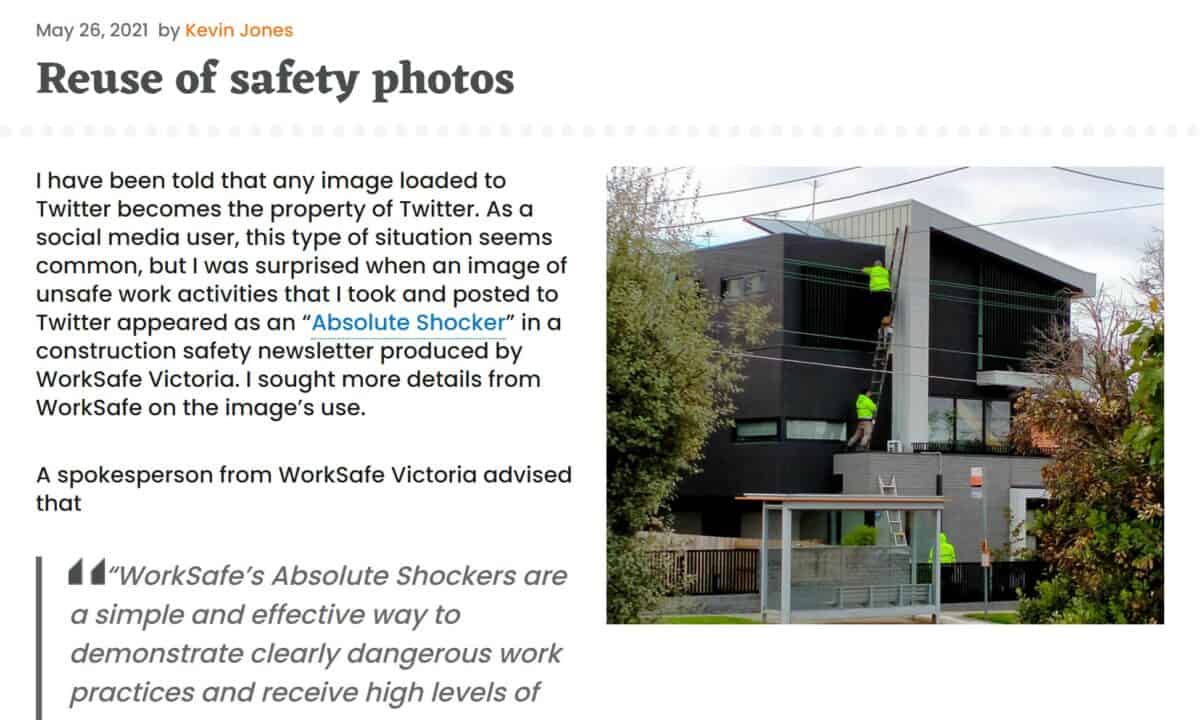 It has taken several months to obtain some clarity from the Copyright Agency about WorkSafe’s reuse of an image of mine in one of their email broadcasts without my knowledge.

This week the Copyright Agency advised:

“The Government Statutory Licence, in particular that under s.183 of the Act, allows the Government (Commonwealth and State/Territory Governments) to use copyright for government purposes but they must come to terms with the rightsholder or (for government copies i.e. reproduction) the declared collecting society. It seems that the use of your image by WorkSafe Victoria in the manner you describe likely falls within the uses allowed under s.183.

Copyright Agency is the declared collecting society for the reproduction of works by Commonwealth and State/Territory governments under the Government Statutory Licence provisions of the Copyright Act 1968 (Cth). Our agreement with the State of Victoria covers government copies/reproductions made for internal government use and does not cover the use of images in the circumstances that you describe (i.e. in newsletters made available to subscribers).”

In my original article on this matter, I wrote:

“I may not have copyright on the image I posted to Twitter but there is Copyright and there is Courtesy.”

It would have been nice if coming “to terms with a rightsholder” would include direct contact with the rightsholder before an image’s use. However, posting to Twitter may mean that I relinquished my rights to the image (I have not churned through Twitter’s terms and conditions).

The last sentence in the quote seems to close off the matter and includes a warning to those who may share images with WorkSafe. It seems WorkSafe’s email bulletin is not for internal use, even though it is an integral part of the organisation’s communication strategy with the community, and so any image could be used from any source. It seems attribution of the source is also not required, which is odd when one considers the risk of using internet images without validating their authenticity.