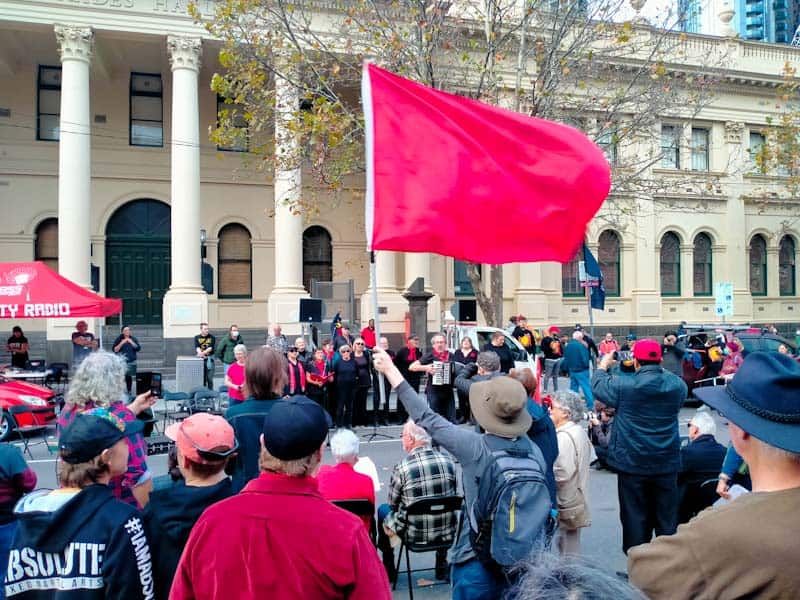 Employers are less criticised about their workplace health and safety performance than the government, even though it is employers who have the primary duty of care for their workers’ occupational health and safety (OHS). The Federal (conservative) government and Prime Minister remind us regularly that the responsibility for OHS sits in the State and Territory jurisdictions. No one seems to accept their own responsibilities for OHS, so it is little surprise that worker health and safety has no effective national coordination.

Recently the Australian Council of Trade Unions (ACTU) released an OHS report entitled “Morrison Missing in Action on Work Health and Safety“. It is also looking in the wrong direction. Of course, the Prime Minister is missing in action – employers have the primary duty of care, which local jurisdictions enforce.

Although this document has good OHS information, references and statistics, it is primarily part of the current federal election campaign, reporting information that the politicians mostly already know.

According to the media release accompanying the report, the trade unions’ main OHS issues with the federal (Morrison) government are:

• “Their refusal to introduce Industrial Manslaughter laws in the model work health and safety (WHS) laws;
• Failing to implement recommendations from the 2018 Review of WHS laws requiring employers to take steps to reduce psychological injury and sexual harassment in the workplace.
• Implementing a full ban on high silica content engineered stone.”

Industrial Manslaughter laws do not need to be included in the model Work Health and Safety legislation, as recommended by Marie Boland. Victoria has shown this is achievable outside the WHS laws, as it has with its proposed psychologically healthy workplace regulations. The federal government has made it clear that it has no appetite for nationally applicable IM laws through the WHS model laws.

So, ACTU develops an alternative strategy. It is easy but a bit slow – encourage and support every State Government to introduce IM laws when the Australian Labor Party is in power in those States and Territories. The ACT had similar laws almost 20 years ago (Labor governments in Victoria, Queensland, Western Australia and South Australia all have or are getting IM laws). So wait for the ALP to get into power, and IM will come. In the meantime, all States and Territories have laws to address serious breaches of OHS/WHS laws by ignorant or negligent employers.

Similarly, on sexual harassment, the States have the capacity, if not the will, to review their own OHS legislation to specify the obligation of preventing sexual harassment in workplaces. In fact, to a large extent, this will likely be addressed through Victoria’s psychologically safe workplace regulations and the national regulations due this year through a broad definition of harassment. The challenge for the union movement is to add their support to local State and Territory initiatives on the prevention of sexual harassment. The ACTU should ask itself, why keep demanding action from a government that ideologically opposes you? Couldn’t that energy be spent on a different, more local target – one that will at least listen seriously to you?

The call for a ban on engineered stone is now weaker than, only, three years ago. Some States have already published guidance on preventing or minimising silicosis risks from engineered stone; many have increased inspectorate activity on this hazard. I have been told that engineered stone products are now on the market with a substantial reduction in silicon content. In the Hierarchy of Controls context, substituted products are now available, which reduces the need for elimination. Of course, even less risky stone products have always been available, but these fell out of fashion when the market promoted cheaper lighter, but much riskier engineered stone. A more sustainable campaign for the ACTU would be to endorse and support the state-based OHS inspectorates.

The ACTU stated in its media release that:

“Overseen” implies that Morrison influences the workplace fatality rate. Morrison has repeatedly stated that he is not responsible for workplace health and safety. This may indicate weak leadership but is accurate. The States and Territories police the OHS duties and activities of employers.

The ACTU report is a good summary of the major OHS priorities facing Australian workers. It provides useful statistical references and interesting case studies, but it remains a political document released in the middle of a Federal election campaign. It intends to inform AND affect voting intentions, even though it is really talking to its members and stakeholders as most trade union literature does.

Last Sunday, the trade unions held their May Day rally outside Trades Hall in Melbourne with the dying cut flowers at the base of the workers’ memorial in the background. Before the march, there was no mention in the speeches of OHS or the International Workers Memorial Day a few days prior. I found only one of the political newspapers on sale and free back issues, to include an article on worker health and safety.

The trade union movement frequently makes calls for changes in industrial relations and a selection of OHS matters. Whenever it looks like a conservative national government will fall to the opposition, Labor and Greens parties, the unions’ enthusiasm gets a little louder and more confident. That tone is all over the ACTU’s OHS report. If the Australian Labor Party wins, there will be legislative change on OHS matters, but likely not as much as expected. The (new) government will still face the same pressures and arguments from the business community as the old one. And the trade union movement may come to realise that the ALP is not nearly as receptive to its OHS policies or the sensible hazard prevention measures as hoped for.

OHS politics is usually two steps forward under Labor and one step back under the Liberals.