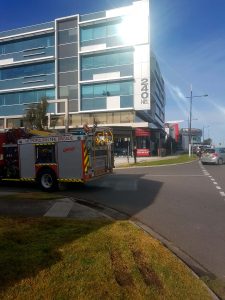 On 12 July 2017 a kitchen fire broke out in a densely packed restaurant and cafe sector of Melbourne, Australia.  This article illustrates some of the localised response and firefighting attempts.  Earlier that day I was in a cafe in Melbourne’s northern suburbs when the building’s evacuation alarm sounded (pictured right).  There was no fire in the cafe and patrons were confused when directed to evacuate by a voice on the speaker/alarm system.  This confusion was not helped when the young waiters told patrons to stay, kept serving patrons and  continued to take orders.  This experience illustrates significant misunderstandings about emergency protocols in public areas.

The ground floor cafe was in a four-storey building on the edge of an industrial/retail estate.  The first stage of the evacuation alarms sounded for several minutes.  Patrons looked to the waiting staff for guidance but confused looks were everywhere.  Business continued as normal but with loud alarm noises. After a few minutes, the alarm sound changed and a voice instructed everyone to “evacuate now”.

I, and around half of the patrons, got up to leave.  I wasn’t sure whether I was allowed to leave without paying my bill so I joined six others at the cash register and waited patiently to pay.  In the queue were other patrons wanting to place orders.  The waiter serviced everyone in turn regardless of the specific purposes, all the while telling patrons that there was nothing to worry about and that there was no need to leave.

What voice should we follow?  The alarms indicated that there is some sort of emergency in the building. The voice telling us to “evacuate now” was soon supported by streams of workers exiting the building and assembling across the road and then by the arrival of a fire engine.  Still patrons were advised to remain in the cafe by the waiters.

It is reasonable to expect the same process to occur in a cafe or any similar small business.  The cafe is as much a workplace as any other occupying a multi-tenant building and should have evacuation processes that are consistent with the other tenants.  That instructions given to patrons to remain during an evacuation process was confusing and, arguably, in breach of their safety obligations and, it is suggested, the conditions of their tenancy.

A good summary of Australian fire/evacuation requirements, plans and processes can be found HERE.  But it seems that the cafe’s evacuation responsibility most strongly comes through the OHS duty to look after the health safety and welfare of those who may be affected by your work.  Perhaps this duty seems too distant for safety planning in cafes.