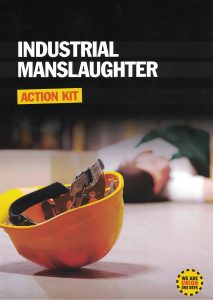 The Victorian trade union movement is preparing for the November 2018 State Election with one element of that campaign being the advocacy of Industrial Manslaughter laws.

At the end of January 2018, the unions “kicked off” their campaign with a meeting which reviewed the challenges and wins for injured workers in 2017 and outlined their intentions for 2018. The Industrial Manslaughter Action Kit included a petition which says:

We call on Daniel Andrews to provide a safer Victoria and ensure no-one is above the law.  we call for legislation so negligent employers and senior managers can be charged with industrial manslaughter when a person is killed at work.”

The unions are taking inspiration from Queensland for the structure of the industrial manslaughter laws.  It can also be said that they are also following the strategy and timeline from the Queensland election where the issue is pushed when political parties are most keen on gaining an electoral edge.

It is difficult to see the current (Labor) Premier, Daniel Andrews, not introducing these laws.  Even if the laws do not lead to any prosecutions, Premier Andrews will have satisfied the wishes of a sizeable proportion of his party’s ideological and financial supporters.

However Victorian Governments, of both political parties,  have supported an approach to occupational health and safety (OHS) laws independent of the other Australian States.  The Australian Labor Party will be assessing whether an ideological debate on these laws is worth while during the election campaign.  Action will be determined, not on OHS grounds, but on political expediency.

The Victorian Trades Hall group also proposed a serious assessment of the United Kingdom’s definition of “senior manager”.  It is understood that this is the definition being suggested.  The attraction in an OHS sense is obvious – delegation of action but not of responsibility.

The push for Industrial Manslaughter laws is no surprise as the union movement and some safety advocates have been after these laws for years.  The Queensland laws have increased confidence.  But the focus is narrow and the benefits of industrial manslaughter laws in preventing harm is undetermined. (A common question at seminars on these laws in the past from business owners has been “how do I insure against the penalties?” Preventing harm is rarely discussed)  Many advocating these types of laws speak from a basis of frustration, anger and injustice.  In relation to workplace fatalities, this perspective is understandable but OHS-related laws are designed to prevent harm as the first priority, and punish as the second.

3 thoughts on “Victoria is ripe for Industrial Manslaughter laws”