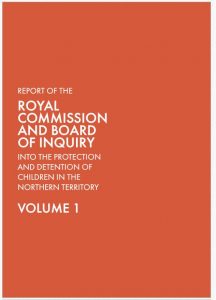 In June 2016, the Australian Broadcasting Corporation showed an investigation report into the detention of children who had broken the law in the Northern Territory.  The revelations of maltreatment were so confronting that a Royal Commission was announced by the Australian Government very shortly after.  The Commission’s final report was tabled in Parliament on November 17 2017.

All Australian workplaces are subject to clear occupational health and safety duties and obligations that relate to workers and to those who may be affected by the workplace and activities.  (The SafetyAtWorkBlog article “Royal Commission into juvenile detention should include OHS” discusses this at length.)

A brief search of the Final Report of the Royal Commission into the Protection and Detention of Children in the Northern Territory shows an acknowledgement of the OHS perspective but with little discussion of it.

Page 78 of Volume 2A of the final report makes this statement in relation to detention facilities:

The quote above is based on references to the United Nations Standard Minimum Rules for the Treatment of Prisoners, and the Rules for the Protection of Juveniles Deprived of their Liberty, and not the Northern Territory’s work health and safety (WHS) laws. A Guide to those laws states one of the aims of the WHS Act is

“protect the health and safety of workers and other people by eliminating or minimising risks arising from work or workplaces.” (page 4)

“A lack of consistent rules and procedures for operating the centres meant that clear information could not be communicated to both staff and detainees.”

In the OHS context, the Royal Commission noted

“Not only children and young people were affected by lack of consistency. Staff members at higher management levels, and the management styles they brought with them, changed regularly. created an unsettled and unpredictable workplace for the centre staff, with one former worker stating  she ‘didn’t feel it was worth raising things with management after a few years because I could see nothing was going to change or be different’.” (page 125, Volume 2A)

The finding in relation to the lack of consistency and clear standard operating procedures (in OHS-speak, an element of “safe systems of work”) was:

“From at least 2010 onwards, detention centres in the Northern Territory operated without up to date standard operating procedures. The failure to keep operating procedures up to date led staff members to run the centres as they saw fit on a shift-by-shift basis. This created an atmosphere where staff and detainees did not know what they could or could not do in the detention centres, which, in turn, was a likely catalyst in the escalation in behaviour and critical incidents involving detainees.” (page 125, Volume 2A)

The Northern Territory Government oversaw a detention centre where employees “did not know what they could or could not do” in their workplace and this uncertainty led to an “escalation in behaviour and critical incidents involving detainees”.  In other workplaces subject to the same OHS/WHS laws and obligations, this would have been a crisis and the Safety Regulators would be expected to have intervened.

The Royal Commission agreed that none of the youth detention centres in the Northern Territory were fit for purpose but there is also evidence that these facilities were never fit for purpose, which ties in to the OHS-related concept of Safety in Design, and that these issues contributed to riots and other incidents.  The Royal Commission states in its Executive Summary:

“The facilities had features that increased risks to both detainees and staff including fre hazards and design features that had the potential to heighten the risk of self-harm and mental health issues. The impact of the facilities together with aspects of other conditions in the centres very evidently
played a part in the incidents that occurred during the relevant period.” (page 13, Volume 1)

NTWorkSafe’s Guide To the Work Health and Safety (National Uniform Legislation) Act states the following duties of the Person Conducting a Business or Undertaking (PCBU) a slightly broader equivalent to an “employer”:

PCBUs owe a similar duty of care to other people who may be at risk from work carried out by the business or undertaking.” (page 8, emphasis added)

“The Commission accepts, as the Northern Territory Government has argued, that some 550 youth justice officers were employed across the detention centres over the 10-year period which the Commission is charged with investigating and that it has heard evidence from only a small number of them. Those youth justice officers who gave evidence in the public hearings were not challenged about their perceptions of limited training and the attitudes and culture prevailing in their respective workplaces when they were employed. Some youth justice officers and management did reject some of those observations about a prevailing culture where their conduct was concerned. Having carefully considered the Northern Territory Government’s objections to general conclusions being drawn from this body of evidence, the Commission is of the view that it may do so.

The relevance of culture to an organisation, its management, its fairness and its success has been a regular theme in this blog in discussions about culture and the social interconnections.  The Royal Commission found that there were sufficient procedures, guidelines etc for good governance:

“However,  senior executives and management led a detention system which focused more on punishing than rehabilitating the children and young people in their care. In doing so, they created rather than solved problems and the long-term consequences of their actions have likely made the community less safe. At the same time, their actions caused suffering and, very possibly, in some cases, lasting psychological damage, to those who not only needed their help but whom the state had committed to their care.” (page 22, Volume 1)

The Royal Commission into the Protection and Detention of Children in the Northern Territory needed to focus on issues that directly affected the welfare of inmates, as per the Terms of Reference, but there is room for a discussion about the OHS expectations, duties and obligations in detention facilities.  This discussion does not seem to have occurred… yet.