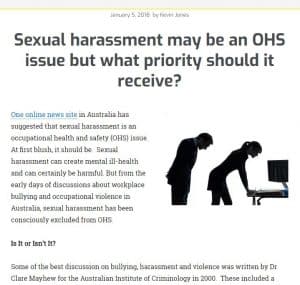 A recent SafetyAtWorkBlog article promoted in LinkedIn has generated many responses, mostly from people who have not read the whole original article, about whether sexual harassment is or is not an occupational health and safety (OHS) matter.  Below is a summary of some of those comments.

The majority position is that sexual harassment incidents should be reported immediately and should be handled by your Human Resources (HR) Department. All workplace incidents should be reported immediately to whoever is responsible for this in a company or organisation.  Part of the concern with recent accusations in the entertainment industry in many countries is that incidents are only now being reported even though they are years and decades old.  In safety management a lot of work over many decades has gone into encouraging the timely reporting of incidents internally and also as a legislative obligation to OHS authorities.  In shorthand, OHS law has long required mandatory reporting, to external authorities, of certain categories of incident – sexual harassment is not one of those categories.

For some reason, this progress and effort has not been paralleled by companies or the Human Resources sector.  This situation was implied in an opinion piece in the Fairfax Media on January 10 by Lyn Goodear, CEO of the Australian Human Resources Institute.

Some LinkedIn commentators agree there is an OHS context but believe sexual harassment accusations can be more efficiently handled by HR.  This may be the case but very few workplace incidents are investigated or managed by OHS OR HR.  Good investigative practice would be that these issues are handled by both disciplines, though with differing emphases.

“Safety has the role of prevention, control, education is [sic] and response. Post event would be claims and record keeping. HR and RM [risk management] take on the rest.”

This split between prevention and  recompense/rehabilitation is common and works for many incidents but less so for incidents involving mental health impacts, as sexual harassment can be considered.  The milestone point in the worker continuum is not as clear as it once was.

This also illustrates the issue of whether one should manage safety or safety liabilities.  Frequently, it seems, OHS is intended to prevent harm where HR and risk management is about managing the corporate liability.  It is not as clear-cut as this, in reality, but this perception seems to be reinforced by many of the current sexual harassment accusations in the media.

One writer illustrates the conflicts and proposes the best solution:

“Allow HR to talk and enforce the ethical treatment of all workers. Harrassment is not an occupational injury. If the harrassment resulted in harmful behavior that injured a person it would most likely fall into a violent act and be a workers compensation claim. I am not attempting to fragment a company and think that open fluid interactions with in department will be the best course of action.”

Open, cross-disciplinary interactions are the best course of action but the writer seems to miss that OHS is founded on the minimisation of harm.  Harm has become a much more complex concept since the issue of workplace mental health has entered OHS.  Sexual harassment may not generate harm to the extent that would fit with workplace violence and may never generate a workers compensation claim, which itself would be based on the proof of harm being created.

For years OHS has been advocating for the creation of a safety culture.  Lately that has morphed into an organisational culture that focusses on safety.  Human Resources has never been excluded from this culture and, as the discussion progressed, the integration of HR has been seen as essential to creating a sustainably safe and healthy culture.  Much debate has happened between OHS and HR, about how this is achieved and who is the dog and who is the tail..

It is also interesting to note that most of the respondents on LinkedIn are from outside Australia and that many are from Canada, a country that perhaps has done more from providing managerial approaches to mental health than many other countries.

The current discussion on sexual harassment at work has the potential to substantially progress, and clarify, what is meant by workplace mental health and what are the most effective strategies to manage and prevent its impacts.