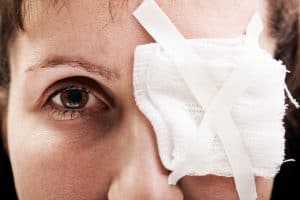 The Australian Institute of Health and Welfare (AIHW) released two statistical reports on May 16 2018, one concerns eye injuries and the other, hospitalised injuries.  Some occupational injury data is readily accessible, particularly on eye injuries.

“Activity at the time of injury was unspecified in roughly two-thirds (69%) of eye injury cases for 2010–11 to 2014–15 (Table 2.18). Overall, While engaged in sports was the most frequent specific activity reported (8%), followed by While working for income (6%). Males sustained higher proportions of eye injuries while playing sports (10%) or working for income (8%) compared with females (3% and 2%, respectively).” (page 20)

Interpreting “while working for income” as at work or at a workplace, the 6% represents 2,939 work-related eye injuries between 2010-11 and 2014-15.  Not sure what that figure would be as a proportion of the total Australian workforce.

Perhaps of more significance is the first sentence of the quote above, we don’t know what the person was doing at the time of the injury.  How can anyone develop a harm prevention strategy when two-thirds of the data is missing?  Whether this was not provided or not requested is unclear but it is a substantial limitation to the type and validity of data required for companies, industries, regulators or government to do something to improve the situation. (This data limitation is mentioned repeatedly throughout the AIHW report)

One could argue that it does not matter and acknowledging that this type of injury is under-reported is sufficient. However, this is avoiding the need to continuously improve our state of knowledge of workplace hazards and risks, on which the OHS legislation and workplace OHS duties are based.

Given the data limitations highlighted above, there is clear data about eye injuries in some industry sectors, as per below

“More than half (57%) of exposure to inanimate mechanical force-related eye injury cases had an unspecified place of occurrence (5,975 cases). Five specific locations accounted for 36% of all places of occurrence for such injuries (Figure 2.5). These locations were the home (1,991 cases), sports and athletics areas (544 cases), industrial and construction areas (480 cases), schools, other institution and public administration areas (391 cases) and trade and service areas such as restaurants and bars (335 cases).” (page 18)

Overall these occupational numbers are small but when addressing injuries in specific sectors this data can be useful in countering the perspective that “we don’t have that risk here” and in justifying a safety campaign on a particular injury type.

The AIHW eye injury report does get industry specific for a short while on pages 21-22.

The type of eye injury is also mentioned on page vi:

“The most common type of eye injury was Injury of eye and orbit (35%), followed by Orbital bone fracture (22%). Construction (14%; 400 cases) was the most frequently specified employment sector where eye injuries occurred While working for income. A further 9% of cases occurred in the Agriculture, forestry and fishing sector (268 cases).”

Australia’s construction is pushing for mandatory safety glasses and the statistics here reinforce the existence of eye hazards.  The comparatively low numbers could cause some so to say that it is not a frequent hazard so large-scale intervention is not necessary but this would ignore the under-reporting.  The incompleteness of the data has a flow-on effect on how these workplace hazards are seen and understood by some.  An OHS profession may accept the rarity of a work-related eye injury but emphasis the potentially life-changing impact of each of those 668 cases.

Australia has always been short on accurate workplace injury data.  Those who currently collect data do as much as they can with the resources available but the incomplete picture of workplace hazards in Australia, given modern OHS legislation has been in place for over 30 years and we are supposed to be developing evidence-based policies, is embarrassing and unforgivable.

Is it any wonder that the OHS profession struggles for influence when the hazards and risks upon which they are advising are reported as comparably small due to incomplete and insufficient data?