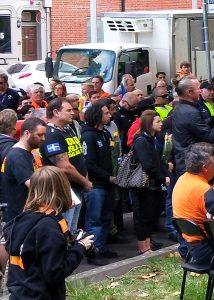 The Australian media on May 16 and 17, 2018 contained several articles about the dropping of a blackmailing case against two prominent trade unionists, John Setka (pictured right) and Shaun Reardon.  There are many issues and allegations in this legal action which started from a contentious Royal Commission and an ongoing dispute between the CFMMEU and the Grocon construction company.

Some unionists, such as the ACTU Secretary, Sally McManus on ABC Radio, say that the current case was “all about safety”.  It is not all about safety and such misrepresentation needs to be called out.  The original dispute was over the election of Health and Safety Representatives (HSR) – whether these could be appointed by the company or the union.  This quickly became about power and influence not specifically about workplace health and safety.

There is no doubt that Setka has a passionate commitment to the safety and health his union members, construction workers and their families.