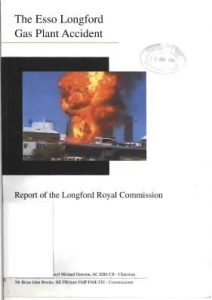 Tonight, SafetyAtWorkBlog will be attending the launch of a new book that includes personal stories about the 1998 Esso Longford explosion – Workers’ Inferno.  The book is being released on the 2oth anniversary of the explosion that killed two workers, injured many others, disrupted gas supplies to the State of Victoria, resulted in a then-record fine for occupational health and safety (OHS) breaches and generated a Royal Commission.  It is also, perhaps, the best example of a company trying to blame the worker for a major incident.

The Federal Opposition leader, Bill Shorten, was an official of the Australian Workers Union at the time and today he published an opinion piece about the Longford incident and its relevance to corporate governance and workplace health and safety.  The article is paywalled by the Herald-Sun newspaper but Shorten’s office has released the opinion piece which is reproduced below:

Every morning, millions of Australians wake up and head to work, their loved ones giving them a kiss goodbye in the expectation that they’ll return safely in the evening. Twenty years ago today, two men went to work at the Esso plant in Longford but they didn’t make it home. That is something I remember all too well. At the time, I was the Victorian secretary of the Australian Worker’s Union.

I’ll never forget the news that there had been an explosion at the Esso plant. I was at a factory in Brunswick and my immediate priority was to get to Longford. Men were dead, others were injured and a wound of grief had ripped through the workers, their families and the town. I was worried about the people who were injured and I was worried about who the company would try to blame.

What kept those workers safe from the ruthless predatory legal blame game of Exxon was the strength of the workforce, including the leadership of George Parker and the resilience of Jim Ward and Ron Rawson. I remember sitting in meetings with them and seeing their remarkable character and conviction. They were so articulate, so authoritative, so determined to do the right thing by the people they were there to represent and defend.

I remember speaking with workers wrestling “survivor guilt”, wondering why it was they had been spared, thinking about how a few minutes either way had made the difference. And I remember, so vividly, the first time we viewed the security footage. There were nine massive explosions, fireballs, and the scene looked like a war zone, like something after an air force bombing raid. And in the foreground of the footage, you can see people sprinting for safety. But every single person in orange overalls — the workers at the heart of the tragedy — were running towards the danger to help their mates.

Seeing those images of pure bravery, of mateship, made it even more despicable when the company tried to blame them for the tragedy. The workers who ran to try to save their mates were the people Esso tried to fit up as the scapegoats for their failures. Twenty years later, the conduct of the company still makes me angry.

Twenty years later, the courage of the workers still makes me proud. It’s common in these times to hear people say that the days of unions are done, that the sun has set on workers and their representatives. They say that health and safety is just red tape, that every hard-fought condition is just another handbrake on profits. They say the fair go has gone far enough and the free market can take it from here. And when I hear people say that, I tell them about what happened 20 years ago at Longford.
I tell them how it was the workers, united, who looked after their friends while the company was only looking for someone to blame.

Last Friday I returned to Longford. On my way down, I was asked why I came back. The answer is simple. I never forgot the men and their families. They taught me a lot about resilience, about courage and bravery. I’ve spent my life standing up for workers and it is experiences like Longford that are why a government I lead will stand up for workers as well. It’s why we will never stop fighting for people’s pay and conditions. Because every Australian has the right to go to work and get a fair day’s pay for a fair day’s work. And because of the millions of families waiting for the return of their loved ones at the end of their shift.