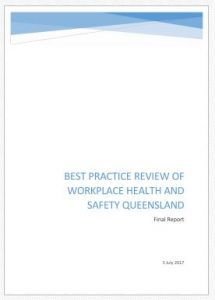 The Queensland Government has released the final report of its “Best Practice Review of Workplace Health and Safety Queensland“. Most of the media attention is given to the introduction of Industrial Manslaughter laws but there are some interesting recommendations and discussion on Enforceable Undertakings, insurance products and other matters of interest to business and safety professionals.

The Queensland Government announced the review earlier this year, particularly, in response to fatalities at Dreamworld and Eagle Farm. A Discussion Paper was released in April.

The significance in this Queensland report is that the document is entitled “Best Practice” so the panel, based on its own experience and the many submissions it received, adds considerable weight to these controversial laws.