The Safety Institute of Australia (soon to be trading as the Australian Institute of Health and Safety) conducted its Perth Safety Symposium on September 28 2018.  It was the event’s second year and, overall, was a success.  But how does one measure the success of a one-day conference?

Firstly, one has to have an interesting and, if possible, fascinating pool of speakers. The keynote speakers included:

Simon Millman MLA represented the West Australia Premierin, what was essentially, opening the conference.  Millman was a good choice for this role as he is the local Member of Parliament, has a history in safety law through asbestos issues and was a member of the WA Government’s inquiry into its new work health and safety laws. 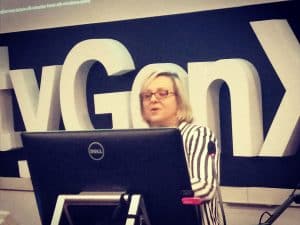 Naomi Kemp told her personal story of a health crisis and near paralysis which tied into the call for more attention on work-related infections as a legitimate but neglected occupational health and safety (OHS) hazard.  Her presentation was very contemporary with lively walk-on music, good use of slides and humour.  This author has seen Kemp present at other conferences on more sombre topics.

Stephanie Mayman was a vibrant speaker.  As an OHS and trade union elder, her voice was of great importance.  To hear from one who was integral to the writing of the original OHS laws for Western Australia was a significant win for the conference organisers and a highlight for those of us who, embarrassingly, were unaware of her efforts and legacy. Mayman was also the Chair of the Ministerial Advisory Panel (MAP) on Work Health and Safety (WHS) Reform on which Millman served. 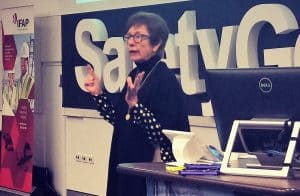 One keynote speaker was a late no-show so the organisers rejigged the program but kept the afternoon’s basic format intact.  This included a group of speakers who were limited to presentations of only 8 minutes on a range of topics.

Todd Conklin sent a video which was a useful way of including an international speaker without the travel expenses but it was a little flat.  Other conferences have been able to use a live connection which has allowed interaction and questions which is a better option, particularly if the speaker has been able to listen in to some of the other speakers.

Professor Steve Allsop spoke about the workplace issues of alcohol.  This issue is one of those that many workplaces have been able to address but it is also a hazard that persists and this persistence seems to be in industries where the hazard is most entrenched.

Dr Ian Dunican spoke about the importance of sleep, another persistent problem that can affect workplace health and safety.  It is perhaps one of those issues that relates more to work-related mental health than one thinks. 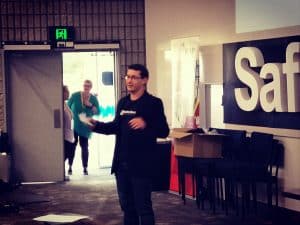 Christian Frost provided a more general discussion of OHS saying that the disgraced safety measure of Lost Time Injuries (LTI) could still be an applicable measure but not one that should be solely relied on.  His concern is that LTI has such a bad reputation that it is dismissed even though , as part of a suite of measures, it can add value.  Needless to say, a question on this was the first one put to the panel later in the symposium.

This eight-minute speaker format was successful in that it provided a good variety of information in as short a time as possible.  In some ways these were teasers – making you hungry for more information and introducing experts.  Most topics demanded some follow-up.

Another advantage is that if a speaker is dull or irrelevant to your interests, you only have to wait eight minutes for the next speaker.  The traditional conferences may include a dull speaker who you have to sit through for thirty minutes before relief. If your conference is going to be a single day, this format allows you to include a variety of perspectives without having messy parallel streams.

So what were the learnings?

The author attended the Perth Safety Symposium as a speaker and guest.