A media release from Australia’s Minister for Employment, Michaela Cash, starts the theme of management of workers compensation on the cusp of National Safe Work Month.  The purpose of the media release is ostensibly to celebrate that Comcare has become a fully funded scheme for the first time since 2010 but this is undermined by party politics:

“These results are another clear example of the Turnbull Government cleaning up after Labor’s slack financial management, while still delivering the most efficient and effective service for injured and ill employees.

Under Labor, Comcare had become a budget black hole into which taxpayer’s money simply disappeared.”

Cash’s statement is a little different from media releases from other politicians in previous years and in relation to National Safe Work Month.  The most common media releases around this time of year that have used the financial health of workers’ compensation schemes as a totally spurious reason for claiming that “[enter State name] has the safest workplaces of any State in Australia”.

Curiously on the same day as the Minister’s media statement was released Safe Work Australia released its “Key Work Health and Safety Statistics, Australia 2017” which included this image of fatalities below. 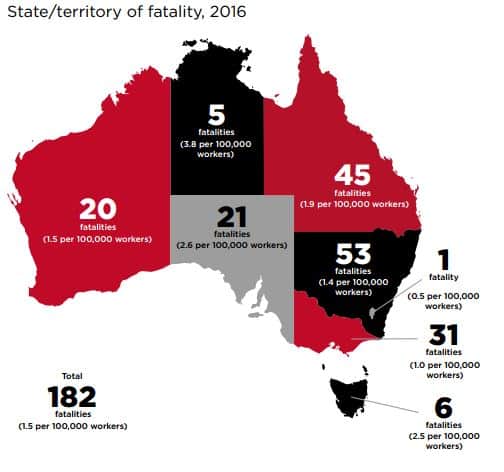 Clearly Minister Cash, in line with the ideology of the Liberal Party, wants to emphasise that the “natural” party of the business community manages money better that the Australian Labor Party.  Any mention of the benefits to injured workers from Comcare’s financial health is missing from this media release but National Safe Work month starts on October 1, so there is still time for Minister Cash to show how the Australian Government is reducing the risk to workers and the broad range of measures being applied.

One thought on “The clash between money and lives”