“Employers need to have motivation to do the right thing, ’cause clearly they don’t do it off their own back.  So, if that means, if this’ll be the difference between them making OH&S a high priority and not, then it needs to be done.  And I think all the other benefits for the men on the ground, and the women on the ground, will filter down from that.  “

Her comments on International Workers Memorial Day emphasises that the introduction of these laws is not so much about new laws but the failure of the existing ones and of their application.  Over time, the general commitment to implementing occupational health and safety (OHS) has declined in many workplaces or, at least, has not progressed in the way expected by the safety law makers of the 1970s and 1980s.

Government has relied on the increase of financial penalties as the major deterrent for OHS breaches when the focus, it appears now, should have been on improvement rather than punishment.  Governments have partly recognised this and introduced Enforceable Undertakings, another legal tool that does not progress OHS as much as allow employers to catchup to the level of compliance that would, likely, have prevented the incident or the death.

The increase in penalties and the soft approach to enforcement, that many believe to have become the norm, has allowed for insurance companies to find a ready market for policies that cover the financial costs of any OHS prosecution, in the unlikely event a prosecution occurs.  These policies have been objected to by lawyers at the same time as acknowledging there is nothing illegal about them.  But many believe there is something immoral about these insurance products that allows employers to avoid the consequences of their actions when those lead to a serious injury or workplace death.

The immorality of the insurance policies is partly responsible for the Australian trade union campaign for Industrial Manslaughter laws.  The justice promised by OHS laws and their enforcement is rarely achieved in a world where safety regulators are loath to prosecute but who increasingly accept weaker Enforceable Undertakings, and where employers can insure against penalties.  It is little surprise that people are demanding a “big stick” approach.  Incarceration ups the consequences of negligent OHS decisions and negates the benefit of the insurance policies.  The policies cover financial penalties but cannot protect against jail time.

There is also an inequity about penalties that Dr Gerry Ayres has pointed to in an interview recently and reinforced at an International Workers Memorial Day workshop:

“…. if I run a red light in my car and I kill someone through my action, it might not be deliberate, I might have been in a hurry, whatever, I can lose my licence and I can go to gaol.  If I am caught drink driving or I have had far too much to drink and I jump in my car and I kill someone in my car I will go to gaol.  If I’m an employer and I kill one of my workers through not doing what I should have done, I’ll get a fine and most likely it’ll be around about the $50,000 mark maybe.  If [I am an employer and] I get caught, the worst that could happen to me is a financial penalty.”

His point is that financial penalties are no longer a deterrent and that the removal of personal liberty and freedom is the only consequence left that will be feared by employers.  This realisation is also occurring to the corporate regulators after seeing the disdain for regulations and the regulators on display at Australia’s Royal  Commission into Banking and Financial Services.

It was clear several years ago that the self-regulation of banking and OHS was not achieving the outcomes government expected.  It was introduced because business said “trust us” and it was cheaper for governments to administer, but large business and small have exploited the trust that came with self-regulation.  The consequences of recent revelations of the corruption in finance, and negligence in workplace safety, has backed governments into situations where incarceration must be considered.

Will Industrial Manslaughter laws achieve improvements in OHS for Australian workers?  It is doubtful, however that is not really the intention although it may be the hope.  The introduction of these laws is an attempt to close off corporate loopholes by imposing a type of penalty that cannot be insured against. The weakness in this aim remains the commitment to prosecution by safety regulators who are affected by the will of whichever political party is in power at the time. 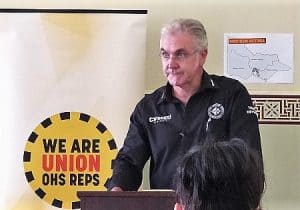 “It is argued that regulation and personal liability, reinforced by criminal enforcement, is perhaps the single most important motivator for a CEO in relation to their responsibility in ensuring high level OHS standards are both implemented and maintained at their organisation’s workplace.  “

The challenge is not that Industrial Manslaughter laws are introduced but that they are applied and enforced consistently and effectiveley.

Ayres’ observations occur at the same time that the OHS Leadership and Commitment expectations of company executives is increased in line with new criteria included in the International Standard for Occupational Health and Safety Management Systems – ISO45001.

Cormie’s comment above shows a belief in leadership and commitment trickling down throughout a company.  This supposed effect has been shown to be a nonsense in economics and of dubious benefit in OHS.  Ayres’ traffic accident comparison is far more persuasive as it is difficult to counter, without being seen as a heartless bastard.  Industrial Manslaughter laws may bring equity to sentencing but there seems little evidence that they improve workplace safety by reducing risks – by themselves.

4 thoughts on “Why are we arguing about Industrial Manslaughter laws?”