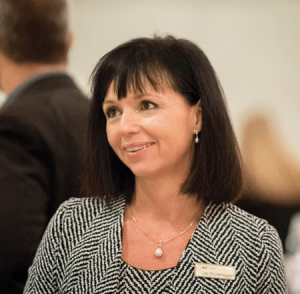 As part of the research for a recent article on Gender and Occupational Health and Safety (OHS) SafetyAtWorkBlog was able to interview Lisa Griffiths, Chief Executive Officer of OzChild and former General Manager Health and Safety at WorkSafe Victoria. Gender equality and diversity may no seem to be an OHS issue but it is a vital element of the legislative obligation to consult and the business imperative of making that decision-making process to be a robust and effective as possible.  Too many past decisions have come from group-think and “yes men” and diversity of thought through diversity of person is desperately needed in modern safety management.

Below are some of the questions put to her, and her responses

SAWB: Gender diversity seems to be more prominent than diversity generally. Should gender diversity be given priority over, or be separated from, other categories such as ethnicity or sexuality?

LG: No, I believe general diversity is a priority overall but good organisations should look at their diversity profile and work proactively to be representative of their community they serve.

SAWB: Should diversity priorities be linked to demographic percentages?

LG: I think there is an element of that but sometimes you must over represent a minority group to get traction. e.g. Fire services. When I worked in Fire Services women made up less than 15 (total) roles out of 600 firefighters or 2.5%, this would not meet the representative population but even if it did there needs to be a ‘balancing’ effect to get critical mass to shift stereotypes around firefighters so in this example I’d intentionally over recruit women for a while

SAWB: Should workplaces have a broad, formal diversity strategy or will diversity trickled down from the gender initiatives?

LG: A combination of both depending on size of the business

SAWB: The OHS profession seems to have a gender imbalance but has anyone ever done the figures? Do we know how the percentages compare to other similar young professions?

LG: In my time in OHS there was active recruitment along diversity lines, even with this most new recruits were white males. Overall females were less than 30% of OHS roles.
If you compare paramedics to this, they now have a 50/50 balance in their recruit courses.

SAWB: I have seen companies throw a female OHS professional into a tense industrial relations conflict because “the blokes will listen to her” or “they won’t abuse her like they do other safety blokes”. Have you had or seen a similar experience? Do you consider this to be gender exploitation?

LG: I think gender gets confused here. Its more about communication for me and how you present the information. Either gender can have massive cut through or poor cut through based on this. Personally, as a female in OHS I was verbally attacked often by different parties, they held nothing back due to gender.

LG: If you are a female ‘leader’ you have had to prove yourself far more often than your male counterpart in certain roles, and have other things to content with. Whether we like it to be acknowledged or not the glass ceiling is alive and well even if talent is equal. Therefore, you have to ‘over-perform’ in a male dominated space and this means bringing something different and having cut through to a new end state.

SAWB: Is it unsafe for companies to use women in this way?

LG: I don’t think companies should hire any women just because they are female- they have to have the credentials to perform the requirements or invest in their development very intentionally

SAWB: I am old enough to have lived through the feminism wave of the 1970s. Why did that wave lose its prominence and momentum? Are the recent gender equality moves a symptom of frustration with the slow pace of change?

LG: I don’t think the cards are dealt equally to start, just using the base example of those who have children, already have a disadvantage even if they choose to go right back to work. Most workplace arrangements do not set up easy processes for women to have equal access around childcare but its improving

SAWB: Can the safety profession change its male-dominated culture without a broader social change?

SAWB: What is the biggest barrier to gender change in the safety profession?

LG: Wiliness and acceptance and dare I say it leadership…..

SAWB: What should the target(s) for change in this profession be? 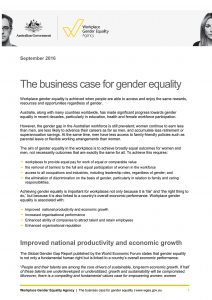 During the conversation, Griffiths directed SafetyAtWorkBlog to a November 2016 report by Australia’s Workplace Gender Equality Agency (WGEA), called “The business case for gender equality” and which states

“Workplace gender equality is associated with:

There is not one of the bulletpoints above that OHS does not affect or which should exclude OHS.  Health and safety law requires businesses to consult on OHS issues and those issues have gradually 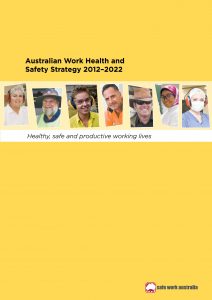 expanded from production mechanics to include human and organisational factors so OHS should be guaranteed a seat at the C-suite table.  And the obligation to consult is blind to gender.

Analysing this task means that managers and other leaders need to talk and need to listen and then to act on what they have learnt to improve health and safety.  It is not difficult, or it should not be difficult as safety improvement can also improve productivity and profits.  As long as the leaders can shelve their suspicions (and outmoded myth-clinging) about safety as a cost, consultation can be surprising, but only if that consultation is effective and does not only listen to the same opinions from the same faces.  And in many workplaces in Australia, those faces remain predominantly male.

The WGEA report provides evidence that increasing women’s participation can

The report identified that

OHS will be an unavoidable part of that improved decision-making, as long as someone in that process asks “have we considered the workplace safety impacts of this?” 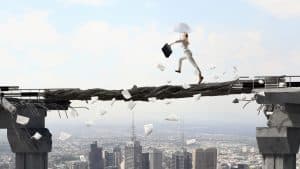 The 2013 edition of the business case for gender equality emphasises the benefits to men of gender equality, a perspective that was not as prominent in the 2016 document.  It said:

Gender equality is not just about making workplaces ‘female-friendly’. It’s about men too:

Men play a pivotal role in promoting gender diversity, and must be engaged in leading organisational approaches.”

One of the reasons SafetyAtWorkBlog approached Lisa Griffiths for her perspective was she spent several years in an organisation steeped in the management of workplace safety.  She could not fail to have grasped the concepts of workplace safety and to have embedded them in her own decision criteria as she moves into other business areas.  Griffiths has progressed to become a Chief Executive Officer but she is almost unique in that safety is an integral part of her considerations rather than an elective module clamped onto an MBA.  The workers of OzChild should benefit accordingly

One thought on “Gender diversity and effective decision making”