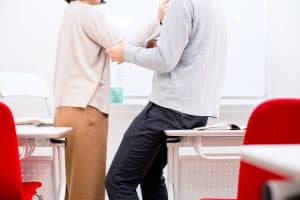 Following on from the very popular SafetyAtWorkBlog article about the report yesterday, it is worth looking at the AHRC recommendations in the occupational health and safety (OHS) context.

It should be noted that OHS places the principal responsibility on the employer, in this instance, the universities and the Vice-Chancellors.  Some have already started to call on the government to play a role, with implications that it should be leading the change:

“The Federal Government can’t simply leave this to universities to solve; it needs to be part of the solution and take this grave issue seriously.”

Federal and State agencies may have a role in monitoring progress or acting on breaches of law but to call on government to have a lead role unnecessarily introduces a political complexity that could delay or derail the safety improvements required.

It is important to realise that the Universities have long had the responsibility for providing a safe and healthy work environment for its employees and others.  The previous blog article established that university students can be considered part of that OHS responsibility.

Recommendation 1 urges the Vice-Chancellors to accept responsibility and establish an advisory body to improve their state of knowledge of the hazard and potential control measures.  From this leadership and consultation, an action plan would be devised to reduce the risk of sexual assault and harassment.  There is nothing radical or difficult in this recommendation.  Most universities already have formalised safety consultation structures and processed.  Building on, and expanding, these OHS structures will allow for Vice-Chancellors to respond quickly to the recommendations.

It will also require previous incident data to be re-evaluated in light of the AHRC findings.  This process has the advantage of contextualising recent data in the existing operations of each university.  The AHRC data may have come as a surprise to some Vice-Chancellors whereas such data is likely to have existed for some time but treated in a different organisational context.

Recommendation 2 addresses the education of students and staff about sexual assault and harassment.  It draws largely on expertise from “sexual violence prevention” but this may narrow the available pool of data and advice.  Australian universities would benefit from drawing on expertise involved with the broader area of “violence prevention”.

Vice-Chancellors should be well aware of major violent incidents in universities’ recent past, such as the 2002 Monash University shooting where two were killed and five injured, the Latrobe University stabbing in 2007, the 1999 shooting at Latrobe University’s Eagle Bar or the sexual assaults at the Australian National University reported in Crikey in 2011.  Focusing on the prevention of violence rather than restricting it to incidents of a solely sexual nature provides opportunities to develop strategies that reduce the risks for all students, staff and visitors.

Recommendation 3 addresses the need to improve internal and external reporting methods, the awareness of these services and of support services and counselling for post-incident assistance.  All workplaces are obliged to have incident reporting mechanisms and issue resolution policies and procedures as part of their safety management system.  These are long-standing obligations and are rarely made available to anyone other than employees or workers.

Universities should continue  improve their internal reporting mechanisms but, particularly after the experience with campus security and dismissive administrations in American colleges as detailed in the controversial documentary The Hunting Ground, should consider encouraging the reporting of assaults, in particular, to the police, in the first instance.  Sexual assault is a crime wherever it occurs and the police are well resourced to investigate such crimes. Promoting external enforcement and investigation also reinforces the commitment to transparency and accountability.

The introduction and management of internal reporting processes can easily be open to manipulation as Australian and other countries have learnt from the various investigation into institutional sexual abuse.  Internal reporting processes of this type will always be treated with suspicion.  Reporting directly to police will re-establish trust and accountability that may be able to be wound back in the future but a high benchmark of intolerance should be established first.

Recommendation 4 suggests that universities make their sexual assault and harassment policies, and action plans, available for external independent auditing.  It is here that the governments could have a role to play, unless there is a conflict of interest.  By allowing government this role, findings can be presented to Parliament on a regular basis as has occurred on other issues from indigenous affairs to railroad disasters to livestock deaths.  It may be politically attractive to give such roles to large accountancy firms that are increasingly entering the OHS advice sector but, if sexual assaults and harassment are important issues, the government needs to establish a level of integrity and independence outside of commercial pressures and influences.

This recommendation advises that

“at an institutional level, universities should draw on sexual violence counselling expertise to develop and review processes……”

As mentioned above, focusing only on sexual violence resources is unlikely to produce a sustainable and integrated risk management program.  Any advisory body or review mechanism needs a broad and inclusive mix of safety experts.

Recommendation 5 sounds like profiling staff members and student representatives and is likely to generate some controversy however in the OHS context this recommendation is part of identifying existing hazards and mapping multiple occurrences.  Such investigations or data collection must be handled fairly and delicately but needs to be conducted in order to produce a risk profile of each university or each school.

Recommendation 6 moves from the existing data in Recommendation 5 to the collation, storage and treatment of similar data in the future.  Interestingly a leading performance indicator is included.  Not only should an investigation and remediation occur, the timeliness of that activity is recorded.  Such an approach is very OHS.

Recommendation 7 involves an audit of university counselling services to identify their level of performance.  Most large organisations have programs and services such as Employee Assistance Programs (EAPs).  From experience these are almost always coordinated through the Human Resources department rather than safety and are almost always reactive.  This has always been a poor use of experts in psychology and counselling.  Recent well being programs have begun to redefine EAP roles but they are rarely integrated into the safety management system.

This recommendation encourages universities to reconfigure counselling services to ensure their effectiveness.

Recommendation 8 is a research task over three-year cycles to monitor progress and, in reality, contribute to the global investigate of campus assaults and harassment.

In some ways Recommendation 9 fits with many of the issues raised in The Hunting Ground in regard to fraternities.  It requires residential colleges and university residences to undertake their own sexual assault management programs in recognition that some of the inappropriate practices have become ingrained traditions. In  short the AHRC wants colleges to “have a good look at themselves”.

The Australian Government, and in particular, its Prime Minister, Malcolm Turnbull needs to show leadership on a public hazard that should never exist and certainly not to the extent identified by the Australian human Rights Commission.  With the very recent departure of Gillian Triggs, there is little justification for political criticism of the AHRC and its Chair and the current report should not draw the same level of criticism as did the reports released by Triggs.

Turnbull can, and should, take the moral high ground by deploring the conduct of individuals in university campuses, be shocked by the level of assaults and harassment and sympathise with the victims. But, more importantly he should stress that this hazard has existed for some time and is not recent phenomena but that the community values have changed to be less tolerant of such activities.  The AHRC investigation is a result of those changes and Turnbull’s actions on the Commission’s recommendations should support and encourage those changes.

The OHS role in the control and management of campus violence issue is likely to be overlooked as OHS continues to be on the fringe of most people’s thinking, including the Prime Minister’s but there are distinct advantages in examining the current issues through the OHS prism, not least being the longstanding safety obligations on universities for a safe and healthy, and respectful, environment in which to work and study.