On 24 October 2017, Australia’s Ministers for Employment and Small Business announced a new taskforce led by the Australian Competition and Consumer Commission (ACCC) that will conduct an investigation into quad bike safety.  What is different about this taskforce is that it is

The importance of the ACCC’s role is significant as it provides a different focus and a different consultative framework to the issue of the safety of quad bikes. It also has the potential to recommend changes that affect both workplace and recreational quad bikes.  It is also useful to remember that it was consumer protection laws and investigations in the 1970s that determined that the three-wheeled agricultural bikes were “unsafe” and were withdrawn from sale in the US.  The potential for changes based on the protection of consumers through the ACCC investigation is high.

The ACCC announcement of the taskforce states that it will “…consider whether to recommend a safety standard for quad bikes that may:

These touch on the points of dispute between quad bike manufacturers and safety advocates. The introduction of a national safety rating system is agreed by all parties but there are arguments about what the rating criteria should be.  Manufacturers of crush protection devices base their products on the belief that quad bikes have an unsafe design that leads to greater injury consequences from rollovers than without such devices.  Signage, rider education manufacturers’ guidelines are less contentious but it is this area where the issue of child access to adult-sized quad bikes is likely to emerge. 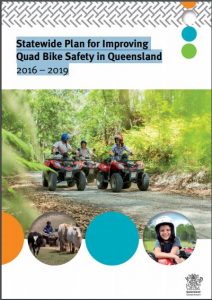 Australian consumer law regulators, including the ACCC, have been active in quad bike safety even though the primary concerns sit within workplace safety laws.  A good summary is available on page 25 of the Compliance and Dispute Resolution Advisory Committee’s Response to Productivity Commission: Consumer Law Enforcement & Administration. A good example of an integrated and inter-agency strategy is Queensland’s Statewide Plan for Improving Quad Bike Safety in Queensland 2016 – 2019.

The proposed Federal investigation timeframe is

A spokesperson for the Department of Employment has advised SafetyAtWorkBlog that