Over the last couple of weeks in Australia, the arguments over the safety of quad bikes (sometimes called All Terrain Vehicles (ATVs)) has become messy. The National Farmers’ Federation (NFF) is in favour of Operator Protection Devices (OPDs) but the Victorian Farmers’ Federation (VFF) is not. Doctors and farmers are calling for a five-start safety rating for quad bikes. One researcher says such a scheme is ready to go. The manufacturers’ industry representative, Federal Chamber of Automotive Industries (FCAI) says no it’s not but here’s a new helmet to wear.

Around all of this is remarkable silence about legal action launched against the Victorian occupational health and safety (OHS) regulator, WorkSafe, by Honda, Yamaha, Suzuki, Kawasaki and BRP over WorkSafe’s interpretation of a legal safety duty.

All the while farmers in some States are continuing to access generous safety rebate schemes.

One of the core concerns of the farming associations is whether the fitting of OPDs should be mandatory.  According to an March 29 2017 article in  The Weekly Times, the NFF says yes but the VFF favours the use of risk assessment which would have OPDs as a risk control option.  Many years ago WorkSafe Victoria created a bit of a stink when it discouraged business owners from undertaking risk assessments of hazards about which the control measures were already well-known.  The rationale was that risk assessments are conducted to identify possible control measures, but that in many circumstances, the control measures have already been identified so additional assessments of risks were a waste of time. For instance, do not assess the risks of machine pinch points if previous assessments and research have identified guards as a suitable control measure. If the guards work, use them.

Industry bodies often call on something to be mandatory from a position where they have no enforcement powers outside their membership, and even then, influence can be doubtful.  But the call raises community and political awareness and if that thing or issue can save lives and/or reduce costs, it will gain attention.

Ms Fiona Simson, President of the NFF, has stated:

“A proactive, positive approach to formalising this comparison (between quad bikes and side-by-side vehicles (SSVs)) can only lead to better and more informed consumer choices as to which vehicle is most appropriate for their needs – from a safety and business perspective.  It will also encourage manufacturers to develop safer, more stable quad bikes for the Australian market, with improved stability, dynamic handling and rollover protection.”

Simson seems to be displaying polite frustration over the safety issue. In relation to the second sentence above, manufacturers seem to be doing little to improve the design of quad bikes and seem prepared to have customers move to the more expensive and safer SSVs.  The only engineering control for quad bikes over the last few years has been the design of a range of operator protection devices, to which the manufacturers object but whose dealers can provide, as accessories.

Regardless of the FCAI’s objections to a “shovel ready” five-star rating system, an NFF spokesperson told the SafetyAtWorkBlog they have no preferred rating system as long as the system is

“…robust, evidence-based and easy for consumers to understand.”

Whatever system is selected or developed, the NFF sees the ANCAP (Australasian New Car Assessment Program) process as an administrative model to be considered.  As an ANCAP-type process develops, NFF believes that

“….the market will encourage adoption of the star rating system by most quad bike manufacturers over time.” 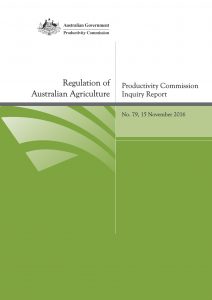 It may be useful to note that in the same week that the NFF and the Rural Doctors Association of Australia (RDAA) called for a five-star rating safety system, the Australian Government’s Productivity Commission released its final report into the Regulation of Australian Agriculture.  This broad-ranging inquiry discusses workplace safety obligations and lists familiar concerns about penalty sizes, over-regulation and unrealistic safety expectations but, surprisingly, the opinions in submissions were not universal.  On the matter of quad bikes, the Productivity Commission noted that

“Between 2010 and 2014, incidents involving vehicles accounted for 76 per cent of all fatalities on farms, with most of these involving tractors, quad bikes or aircraft.” (page 469)

Such a high percentage of fatalities in three types of established farming machinery must indicate that changes are required to current operational practices or equipment design.  A five-star rating system remains an administrative change in the provision of information but this evidence makes the safety decisions more valid.  It would also assist farmers in better determining what is a reasonably practicable hazard control measure without having to wait for an OHS prosecution and court judgement.

In the realm of consumer protection and choice, ANCAP states:

This illustrates the challenge to regulators, consumers and safety professionals in relation to quad bikes. If a five-star rating system was introduced, would a vehicle that achieves less than five stars be “unsafe”?  Quad bike manufacturers would have to explain why a vehicle that has only a three stars rating should still be sold on the Australian market.  The purchasers of work vehicles would receive an improved state of knowledge about the safety of quad bikes and may have to justify why they purchased a piece of equipment with a lesser safety rating, bearing in mind that OHS regulatory advice is that Cost must be the last factor in determining a practicable control measure.

The context of product liability and consumer protection seems to be a subtext in a writ lodged in December 2016 in Victoria’s Supreme Court (S CI 2016 05262) by Norton Rose Fullbright on behalf of five quad bike manufacturers. (The writ, and the supporting Statement of Claim, is publicly accessible from the Supreme Court when not being used by the Judge)  The manufacturers have taken issue with the March 2016 publication in which WorkSafe states:

“A key part of its new approach is to accept rollover protection devices on quad bikes as a means of controlling the risk to operators in the event of a rollover.

This decision means that if a duty holder (normally an employer) wants to use a quad bike in the workplace – and there is a risk of rollover – WorkSafe will require a suitably designed and tested operator protective device (OPD) to be fitted.”

This, and other WorkSafe Victoria statements were quoted in the Statement of Claim.  The manufacturers state:

“… WorkSafe Victoria asserted and continues to assert to the public that an employer responsible for a workplace where an ATV is used, and where the risk of rollover cannot be ruled out, is or will in the near future and without any change to legislation occurring, be under a legal duty to fit an OPD to the ATV.” (page 4)

The statement of claim states that, later that March,

“… WorkSafe Victoria informed the FCAI that fitment of an OPD to an ATV will be required to achieve a safe system of work.” (page 5)

The nub of the manufacturers’ complaint seems to be that

“WorkSafe Victoria has no statutory power to impose on employers who use ATVs supplied by the Plaintiffs in workplaces in Victoria where there is a risk of roll-over a requirement to fit a Quadbar or any other, similar , structure in the nature of an OPD to those ATVs” (page 8)

and that the requirement to fit OPDs, as mentioned above, “was and is made without lawful authority.”  A spokesperson for WorkSafe Victoria advised SafetyAtWorkBlog:

“The writ filed by Honda Australia and other ATV manufacturers is without merit and will be vigorously defended.

WorkSafe’s position is that suitably designed and tested rollover protection devices are an appropriate safety measure and an acceptable means of controlling risk to operators of quad bikes if there is a risk of rollover.

WorkSafe has relied on the significant body of scientific and anecdotal evidence that demonstrates these devices are an acceptable means of controlling the risk to quad bike operators.

There are dozens of examples of riders being crushed to death by quad bikes that were not fitted with rollover protection devices, which is not acceptable to WorkSafe.

WorkSafe believes the use of rollover protection devices will save lives.

We anticipate enforcement activity will begin later this year. “

Perhaps the most fascinating point in this legal tussle, which is due back in Court in early April 2017, is that it has received minimal media attention.  Perhaps this reflects the nature of the media on workplace safety matters.  Perhaps, it is too specific an argument to warrant attention.  It is curious though that the FCAI has not mentioned the writ in its recent media statement about OPDs.  It is accepted that the FCAI is not involved in the lodgement of the writ but several of the manufacturers’ media representatives spoken to by SafetyAtWorkBlog in preparing this article directed enquiries on legal matters to the FCAI.

In many ways the legal action is a distraction to the implementation of safety improvements on Australian farms.  Farmers, as do all employers, must make a judgement call on workplace safety based on the best information available.  On quad bike safety, there is plenty of work-related information available.

But there is a growing perception that the arguments will not be broken in the OHS context but in the area of consumer safety and product liability.  It is important to remember that the balloon-tyred three-wheeled motorcycles of decades ago were banned, or withdrawn, due to the consumer protection activity.

It is also possible that this issue will not be solved by a specific action, decision or at a specific point in time but that the use of quad bikes may fade away as safer vehicles are brought on to the market and increased demand reduces the price of the new vehicles.  The market may improve safety by whittling away at “unsafe” products but this is little comfort to the farming families whose loved ones may die from crush injuries in the mean time.

The legal action being taken against Victoria’s safety regulator is intriguing but it is largely academic as the arguments revolve round regulatory authority rather than how safety is applied in the agricultural workplace.  That safety, according to the OHS laws, remains in the hands of the farmers.