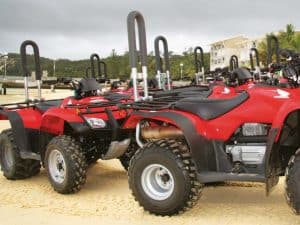 The Milk Maid Marian blog published an update to an earlier post, which was a guest post from Marnie Williams, WorkSafe’s Executive Director, Health and Safety. The blogger, Marian Macdonald, was asked by WorkSafe to amend a paragraph in her original article.  According to Macdonald:

“The paragraph initially read: “This means that if a quad bike is being used in a workplace – and there is a risk of rollover – the employer must fit the bike with an OPD”.

It has been updated with: “This means that if a quad bike is being used in a workplace – and there is a risk of rollover – the employer must consider fitting the bike with an OPD to eliminate or reduce the risk so far is reasonably practicable.”

This is a major safety change.  Originally the safety regulator had determined that action is required, now you only have to think about taking action.

WorkSafe Victoria has had a fraught relationship with risk assessments over many years.  It caused a kerfuffle years ago by stating that risks assessments are not necessary if an existing risk control measure was widely available.  For instance, if  tractor had a rollover protective structure (ROPS) retrofitted because there was a hazard of an injury due to a rollover, there was no need to assess the risk of a rollover in other tractors.  The risk can be reduced by fitting a ROPS.  The most suitable control measure had already been identified.  The safety regulator was so convinced of this control measure that it provided rebates over many years to retrofit a ROPS.

The same strategy was applied to quad bike safety in Victoria.  An OPD had been identified as an appropriate risk control measure in many, not all, coronial inquests and in government safety guidelines, supported by taxpayer-funded rebates.  There was not need to undertake a risk assessment, simply fit the safety device. 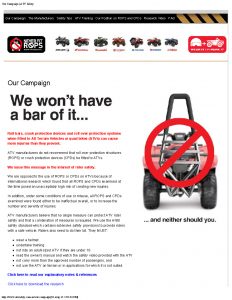 However, WorkSafe Victoria has now chosen to be more equivocal in its quad bike safety advice and consider an OPD, most likely, through a risk assessment process. So why change now?  The only quad bike-related change that has occurred since the Supreme Court case is the announcement by the Australia Competition and Consumer Commission of a new national quad bike safety taskforce.  This taskforce will include WorkSafe Victoria on its major committee and representative of the quad bike manufacturers, the Federal Chamber of Automotive Industries, on a technical committee.  It would seem that WorkSafe Victoria is preparing the ground for a positive consultative environment by accepting the position that the quad bike manufacturers intended to take to the Supreme Court.

This strategic change by WorkSafe Victoria may have returned the relationship with quad bike manufacturers to a working one in the lead up to the new safety ACCC taskforce but it does nothing to change the objections of the manufacturers and their representatives that there is no evidence that OPDs improve safety.  This stance is unlikely to be resolved before the ACCC taskforce and risks bogging down the investigation in to acrimonious accusations that have become de rigueur in quad bike safety inquiries over the last five years.