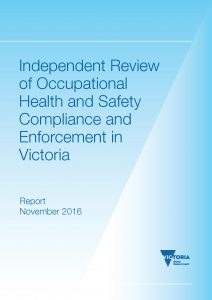 In the middle of 2017 SafetyAtWorkBlog asked why the Victorian Government was slow in releasing the report of an independent review into its occupational health and safety (OHS) regulator, WorkSafe.  Victorians have received a Christmas present with the release of the report of the  Independent Review of Occupational Health and Safety Compliance and Enforcement in Victoria and the Government response.

According to the Minister for Finance Robin Scott’s media release, dated 18 December 2017,

“The review was a Labor Government election commitment and made 22 recommendations – all of which the Government supports in principle.” (emphasis added)