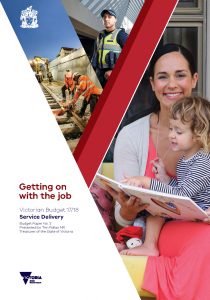 Every government releases a great deal of information, particularly around budget time and occupational health and safety (OHS) funding often gets missed in the overviews and media discussion.  The Victorian Government’s budget papers (Budget Paper No. 3 – Service Delivery) for 2017 included A$3 million to the Department of Health and Human Services (DHHS) for

There is no doubt that such funding will help improve OHS but it also seems odd, given some of the recent incidents and riots,  the corrections and prison services received no specific OHS funding. The introduction of “a trial of independent workplace facilitators” is also intriguing.

According to the Budget Paper Number 3,

“Safety and workplace culture will be improved through programs that address occupational violence against health workers and workplace bullying and harassment, including by:

There is no timeline for this $A3 million program and no specific goals or targets which will make it difficult to assess the return on investment.  It will be necessary to look at the Department’s Annual Reports to assess the expenditure’s success.

The first two aims of the expenditure are quite generic and could apply to many government departments and activities but it is the third that may indicate options for other government agencies and health care organisations.  The trial indicates that DHHS has a problematic workplace culture with the degree of the problem indicated by the need for “independent” facilitators.  This implies that the traditional consultative and organisational structure is not working as it should.  Trade union health and safety representatives (HSRs) have long been part of the traditional health care structures but the funding for independents would imply that the HSR consultative structure is also not working as it should.

A major problem with this approach is that it is very difficult to change a workplace culture from external sources, which is implied by the reference to independents.  The most cynical example of this type of strategy would be the contracting of DuPont for safety culture changes in Queensland Rail following several rail incidents and in anticipation of selling the Government-owned asset.

Time is also a cultural challenge.  It is possible to quicken change but only to some extent before additional problems and hazards are created by the strategy.  It is important to remember that some industry sectors will only achieve a marked improvement in safety through generational change.  Rapid change may be achieved following a major incident or disaster but this is rarely sustained or not as comprehensive  as desired.

The best chance for sustainable and effective change comes from within existing organisational structures, processes and personnel, and it is hoped that this is the pathway expected of the “independent workplace facilitators”. The facilitators should work from within these parameters so that both culture and management are improved at the same time.

It should also be acknowledged that the occupational violence and workplace bullying have existed in the health care sector for some time and that many cultural and physical changes have been implemented.

Allocating additional government funding for OHS improvements should always be welcomed.  But as countless inquiries have identified, the expenditure of that funding needs close monitoring and the effectiveness of the investment needs independent evaluation.  To achieve this, specific performance targets and a detailed project scope are required.  The 2017 Budget Papers included none of this detail for which we will need to wait for DHHS announcements or the release of their annual reports.