“Then I went, ‘Oh hang on, I’ve normalised so much of this as part of my industry…. This last three months has really made us all take a long hard look at what we have even let ourselves think is acceptable.” – Sacha Horler 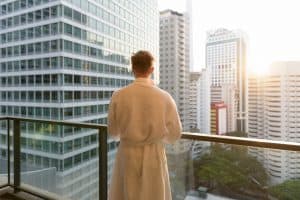 Such a statement is familiar to those working in the field of occupational health and safety (OHS).  This normalisation, or habituation, has underpinned much of the discussion of what builds a safety culture – “the way things are done round here”.  As a result of revelations and accusations pertaining to Gary Glitter, Rolf Harris, Jimmy Saville, Robert Hughes, Harvey Weinstein, and Kevin Spacey, the entertainment industry around the world has been forced to assess the fundamental ethics on which sections of its industry are based.  A similar process has occurred in society through various investigations but in particular inquiries and royal commissions into religious and institutional child abuse.

The entertainment industry has come late to the workplace mental health effects of workplace abuse, partly because OHS has been on the periphery of the industry, even after workplace fatalities, and partly because the industry has tolerated abuse and incivility as, somehow, part of the creative purpose.  As with many industries, traumatic fatalities and injuries have been seen as part of the “inherent” dangers of work activities, work-related suicides have been kept quiet with work issues downplayed unless specifically identified in a suicide note, and workplace mental ill-health rationalised, usually, as an individual weakness rather than a structural or organisational cause. 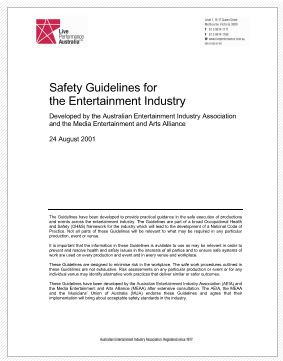 Australia’s entertainment industry has been producing OHS guides since at least 2001.  The Safety Guidelines for the Entertainment Industry  contain very little advice about mental health.  This is not surprising because, at the time, bullying was just emerging as formal and recognized workplace hazard due, largely, to surveys conducted by the Australian Council of Trade Unions.  Stress was still being debated as a hazard, or a performance motivator, and its effects were poorly understood. Dr Drew Rae recently told an OHS seminar, stress was supposedly the cause of stomach ulcers.

An employers’ OHS guide published in 2004 addressed mental health issues mainly and briefly in relation to working hours and fatigue, and the only consideration of psychological hazards was in relation to children working in the industry.

Recently OHS guides and statements indicate that the Australian entertainment industry is more aware of workplace mental health but remains uncertain on what to do to reduce the risks. The 2015 labour hire inquiry submission from the Media, Entertainment and Arts Alliance focusses almost entirely on the issues of wages and stressing the precarious nature of the industry.  The mental health consequences of this industry structure is not mentioned even though the terms of reference for the inquiry mentioned OHS laws, worker welfare and insecure work.

During National Safe Work Month, actor Catherine McClements spoke about the mental health situation in entertainment.  She illustrated part of the reason the persistence of an unhealthy culture in this sector: 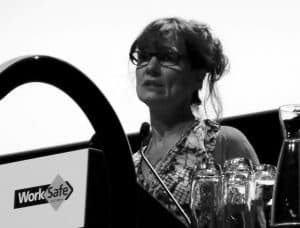 “I have certainly witnessed terrible bullying and very nasty behaviour in the workplace, television… people shouted at and I was wondering why are they allowed that behaviour to go ahead.  I think it’s slightly to do with the mystique of the artistic expression, I mean, who knows why an actor puts in a good performance, no-one can tap into it, and so the sort of workplace is a little bit more sort of allowing of certain behaviours because it may just spark some creative genius.

Also, the power of the high-profile celebrities were not to be messed at because the financial success of a show really sometimes rests squarely on their shoulders and, so they’re given a lot of leeway.

Also, a Director is allowed all sorts of disturbing, in a way, behaviour, because it’s their vision that drives the peace and so everyone is allowing them to do stuff because we all need what they’re going to give an audience and then, again, contracts are often three months. “

The workplace mental health situation in Australia’s entertainment sector is changing and the motivation has come not from scandal but from evidence. The Victorian Arts Centre established a pilot program on mental health in the performing arts in late 2016 – the Arts Wellbeing Collective.  This was largely due to the findings of a 2014 research report into the mental and occupational health of the entertainment industry –  “Pride, Passion & Pitfalls: Working in the Australian Entertainment Industry“.  A later 2016 report was also produced – “Working in the Australian Entertainment Industry: Final Report“.

The 2014 report including shocking statistics such as

“Mental health problems were reported by nearly half of the participants – predominately anxiety, depression, and clinical depression. This finding is supported by international research which states there is a disproportional rate of psychopathology in highly creative persons…” (page 23)

“The Australian Road Crew Collective are people who had worked as roadies between 1968 and 1982. At their inaugural gathering in St Kilda in November 2012, they stated at least 70 roadies have died, many from suicide due to feelings of abandonment….

Disturbingly, it is not only the roadies who are reporting on physical ailments, psychosocial distress and high rates of suicide.” (page vii)

In a hint to issues about sexual abuse and harassment that have emerged recently, the 2014 report included:

“Another participant, who needs to remain anonymous, detailed the case of a colleague who had been allegedly sexual assaulted by a higher management person. Their attempts to report the case, led to threats and intimidation from management until they both fled the work place.” (page 33)

The 2016 report included this statement in its recommendation about culture:

“Contrary to previous anecdotal evidence that the creative industry is a site where the collective is a supportive environment – that is, like a family who take care of each other — in depth interviews revealed a toxic, bruising work environment, extremely competitive, evidence of bullying, sexual assault, sexism and racism which is ignored or dealt with inadequately.” (page 2)

The occupational health and safety profession has been slow to address the psychological health hazards of workplaces.  For decades it downplayed or misrepresented the “health” component of its profession’s title and the legislative obligations.  This slow, plodding process has still provided good evidence about appropriate mental health control measures of which the entertainment industry should pay close attention.

Michael Quinlan and many colleagues have researched the physical and mental effects of precarious work for decades.  Such a work category has focused on labour hire in the past but is now being related to new employment relations.  The performing arts are now embracing the precarious work category as they realise that the socioeconomic and occupational hazards are not unique, and the industry participants have tolerated abuse by, in many ways, contextualising it as something else, as per the comments by McClements and Horler above.  Other workplaces have undergone similar transformations over the last 30 years with initiation rituals becoming accepted as abuse and assault.

Tony Lamontagne and Tessa Keegel produced important work on workplace stress for the Victorian Department of Health in 2012 and Lamontagne and others estimated the economic benefits of eliminating job strain as a risk factor for depression in 2010.

The Institute for Safety, Compensation and Recovery Research (ISCRR) produced guidelines around 2013 for the prevention of mental health problems at work.    the elements recommended for a workplace health and wellbeing strategy sound sensible but also illustrated the level of difficulty in change for the entertainment sector where job control can be minimal, where OHS training is almost non-existent and where toxic personalities have usually not been challenged.

For many years anti-bullying advocates have promoted discussion about the Bystander Effect, where people are fearful of intervening, or are turning a blind eye.  Safety leadership advocates have been saying that leaders accept the level of risk that they walk past and broadcast that level of risk to everyone else in the workplace. In the case of sexual abuse, harassment, bullying and psychosocial ill health in the entertainment sector, the bystander effect became was institutionalised.  The extent of the controversy would indicate that that will no longer be the case.

The Arts Wellbeing Collective was a pilot program and has no confirmed funding for the future.  It is difficult to see, in the current climate, it not receiving long-term funding in order to sustain the strength of the conversation it has generated.  The Collective was well-aware of the research into workplace mental health and has been able to develop programs and tools to assist in managing the problem but, largely, with an individual focus.

The Weinstein/Spacey controversy, in particular, should provide the institutional and cultural change required in that industry sector. The degree of publicity will also change the benchmark for what is acceptable behaviour and safe and healthy work expectations in a lot more industries.  It is a shame that such change occurred as a result of so much personal pain and tragedy but, that has been the way in workplace safety for decades from setting apprentices on fire  to New Zealand’s Pike River disaster.  It shouldn’t be that way, but it is.