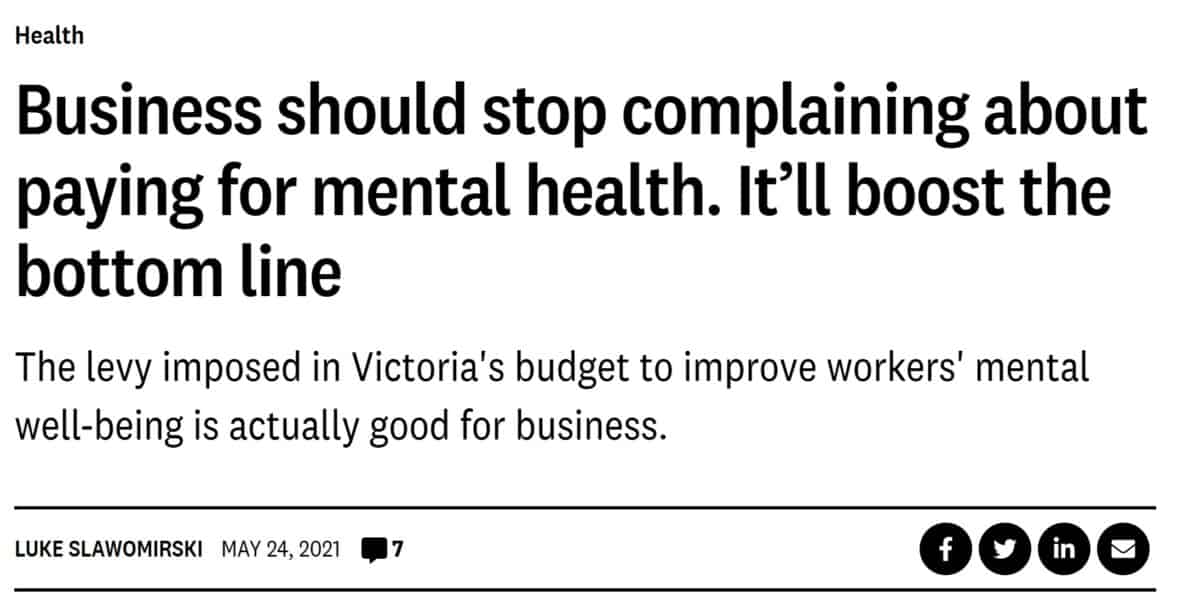 [Article reprinted, with permission, from the May 24 edition of Crikey newsletter]

During the 2020 lockdowns, the business lobby showed a surprising concern for Victorians’ mental health: lockdowns were bad because they’d cause a spike in mental illness and suicides far worse than the COVID-19 cases and deaths they’d prevent.

The suicide spike never happened. What did happen was much-needed additional funding for mental health — $3.8 billion over four years — announced in the 2021-22 state budget on Thursday.

But the way business reacted suggests its interest in mental health has waned.

You see, the measures aimed at better prevention, diagnosis and treatment of mental ill health will be funded by a levy: 0.5% for businesses with payrolls above $10 million and 1% for those above $100 million. Critics, including the federal treasurer, claim this will cruel “job creation and confidence“.

Duplicity aside, the reaction is short-sighted and not grounded in science or economics. Investing in mental health is in everyone’s interest, including business, for several reasons.

The first is the growing burden of mental ill health. Not only will almost half of Victorians experience it during their life, but poor mental health costs the Victorian economy $14.2 billion a year. In addition to expenditure on health and social services, these costs include informal care and lower economic participation and productivity.

The latter both affect business directly. People with poor mental health are less productive and take more sick days. They are more likely to be lose their job and become long-term unemployed. And caring for someone with mental health problems can be stressful and will inevitably affect businesses as well.

The direct costs are dwarfed by the cost of disability and premature death due to mental ill health, suicide and self-inflicted injury, which are estimated to be $151 billion a year nationally — about $39 billion in Victoria on a population basis.

But what makes mental health a really attractive investment target is a high “capacity to benefit”, or amenability to prevention and treatment.

The Productivity Commission estimates that investing $2.4 billion in better mental health services across Australia could generate benefits valued at close to $20 billion a year, including $1.3 billion because of increased economic participation. That’s a fabulous return on investment.

For context, the 2021 federal budget allocated $2.3 billion over four years to it, funded by borrowing and reallocation from other areas of spending (which may explain the lack of outcry).

Can business afford the levy? The latest national accounts suggest it can. In 2019-20, company profits made up almost 30% of national income (figure) — the highest share in recorded history — while the share of wages, at just over 50%, was the lowest since the 1960s.

This trend can’t be explained by higher business efficiency because the data shows labour productivity outpacing multifactor productivity in all but one of the past 20 years.

It’s also no secret that business profited handsomely from the pandemic through COVID-related government subsidies. According to the ABS “subsidies that were not used by businesses to pay wages or operating expenses were retained in profits”.

Given the these factors, perhaps it’s time business gave a bit back?

In fact, aside from the levy, employers can do more than make a modest contribution to government programs. They can directly improve their workers’ mental health by offering better conditions and workplace culture, both powerful determinants of health and well-being as well as driving productivity and performance.

For example, management practices that give workers a degree of discretion and control over how they perform their tasks have been found to improve health, well-being and productivity in sectors ranging from automotive production to healthcare.

The famous Whitehall studies of British civil servants observed an association between these factors and premature death. The first study, conducted between 1967 and 1977, found that workers in the lowest grade were twice as likely to die prematurely from chronic illness than their colleagues higher up the chain — even when risk factors like obesity, smoking, physical activity, blood pressure and baseline illness were accounted for.

A second study (1985-88) produced similar results. It also found that a lack of job control and an unsupportive work culture were important drivers of mental ill health, and were associated with longer absences.

Investing in mental health yields a good social and economic return and businesses will be among the main beneficiaries. Instead of whining about a levy that is modest in the current microeconomic context, business should examine how it can directly contribute towards improving the mental health of its employees.

Luke Slawomirski is a health economist, most recently with the Organisation for Economic Co-operation and Development (OECD) in Paris, France. He lectures in health policy at Imperial College London, is a former clinician, and a visiting fellow at the University of Technology Sydney. (Twitter – @LUKESLAWOMIRSKI)